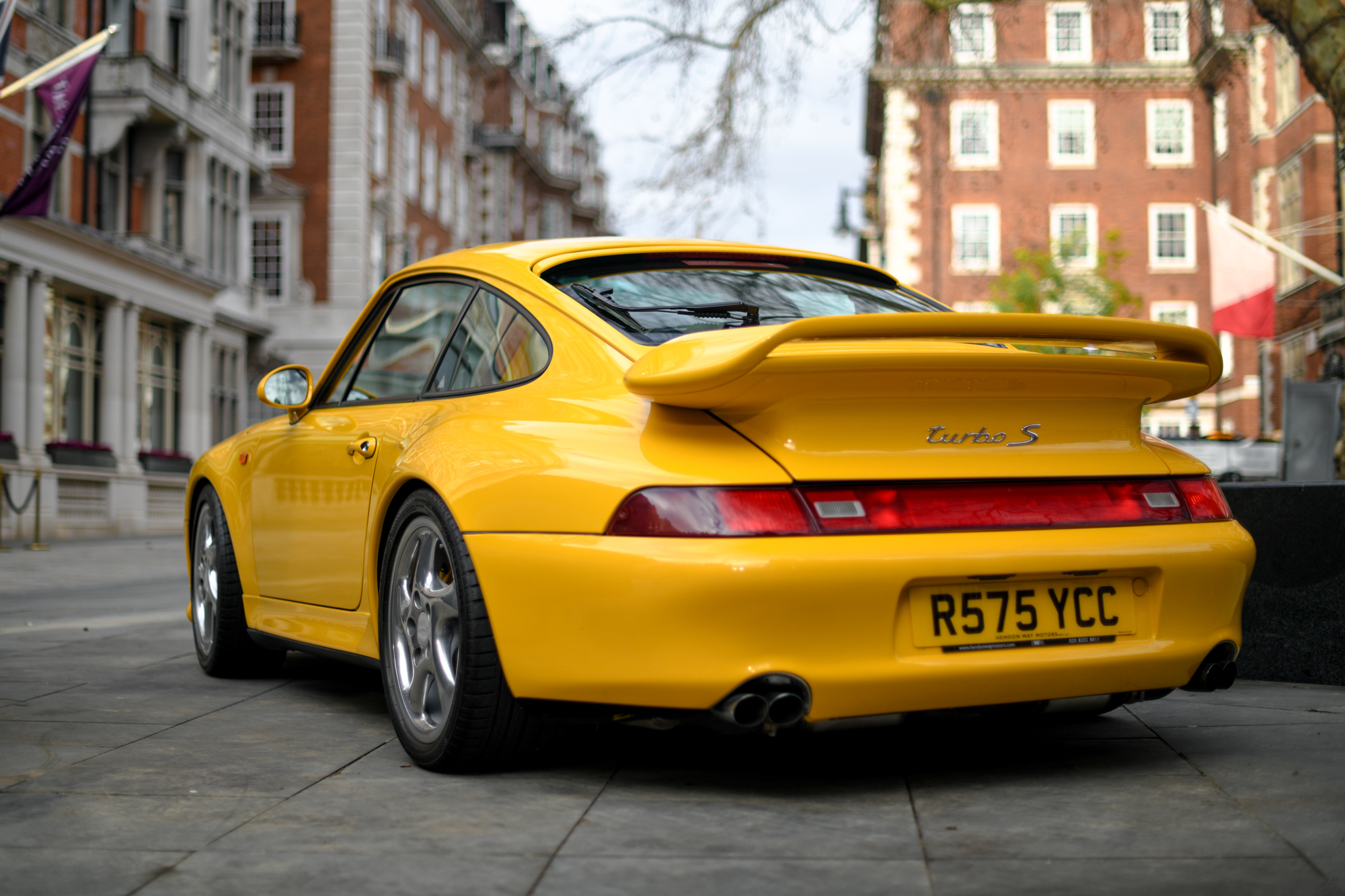 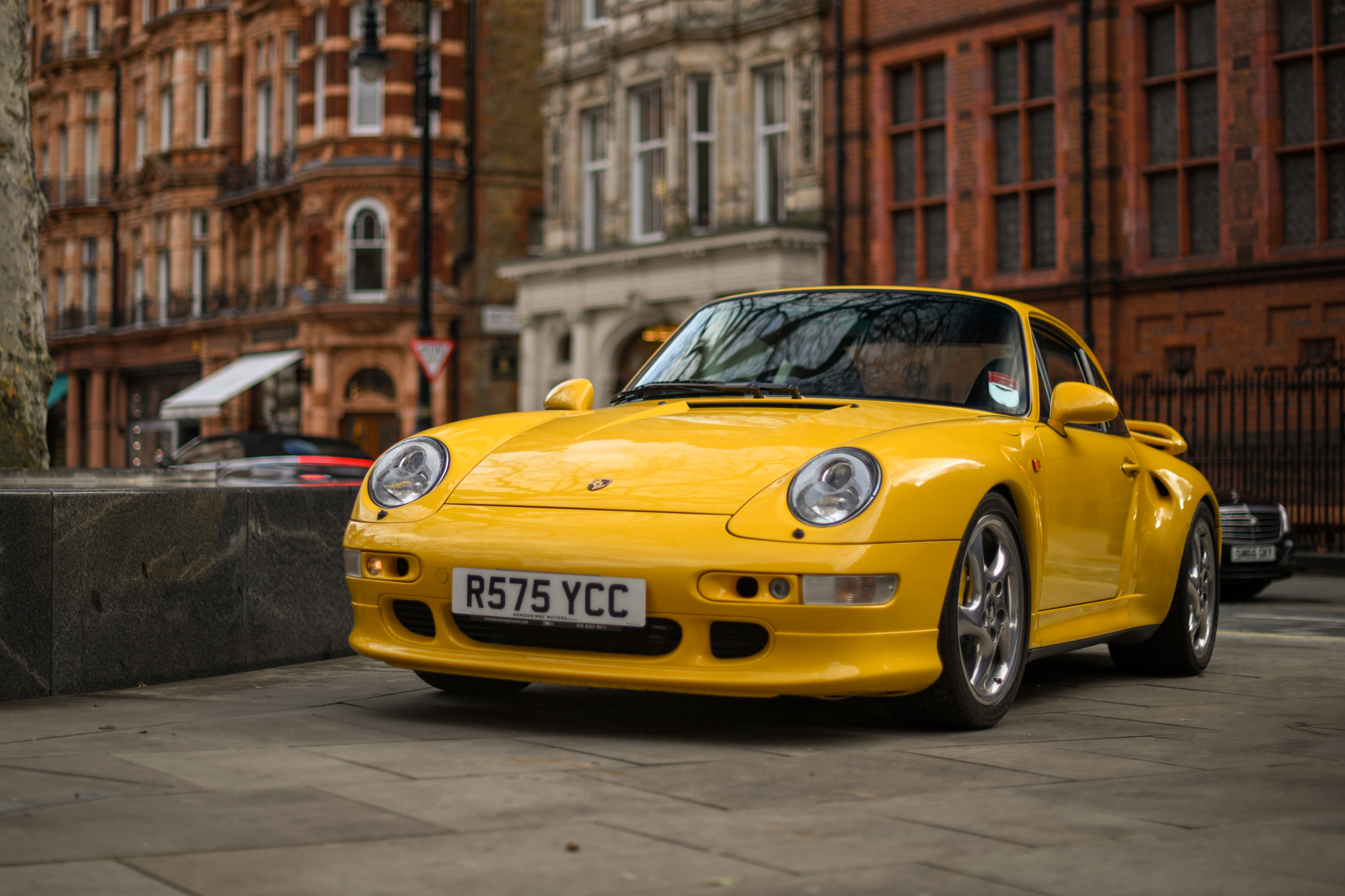 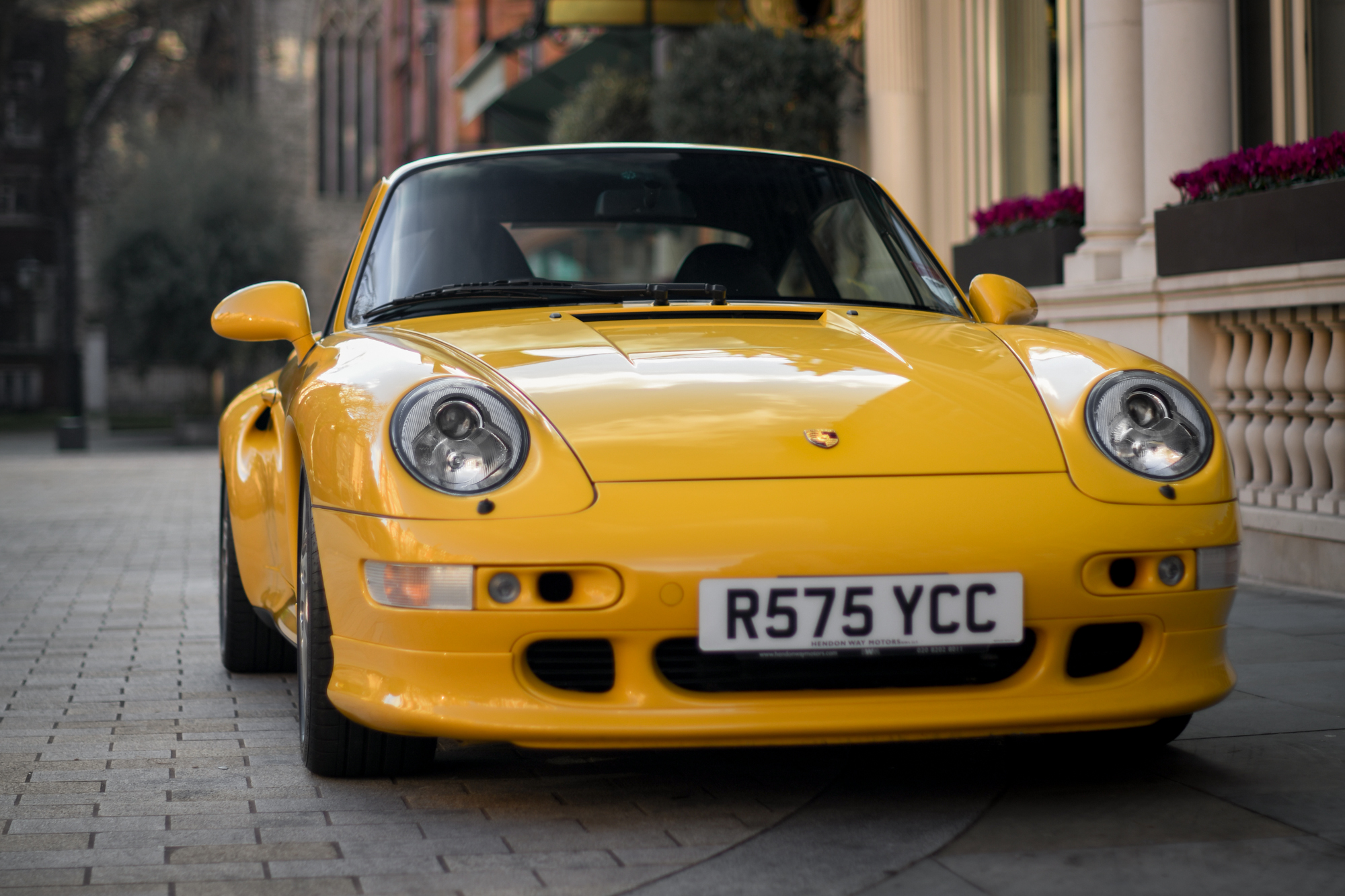 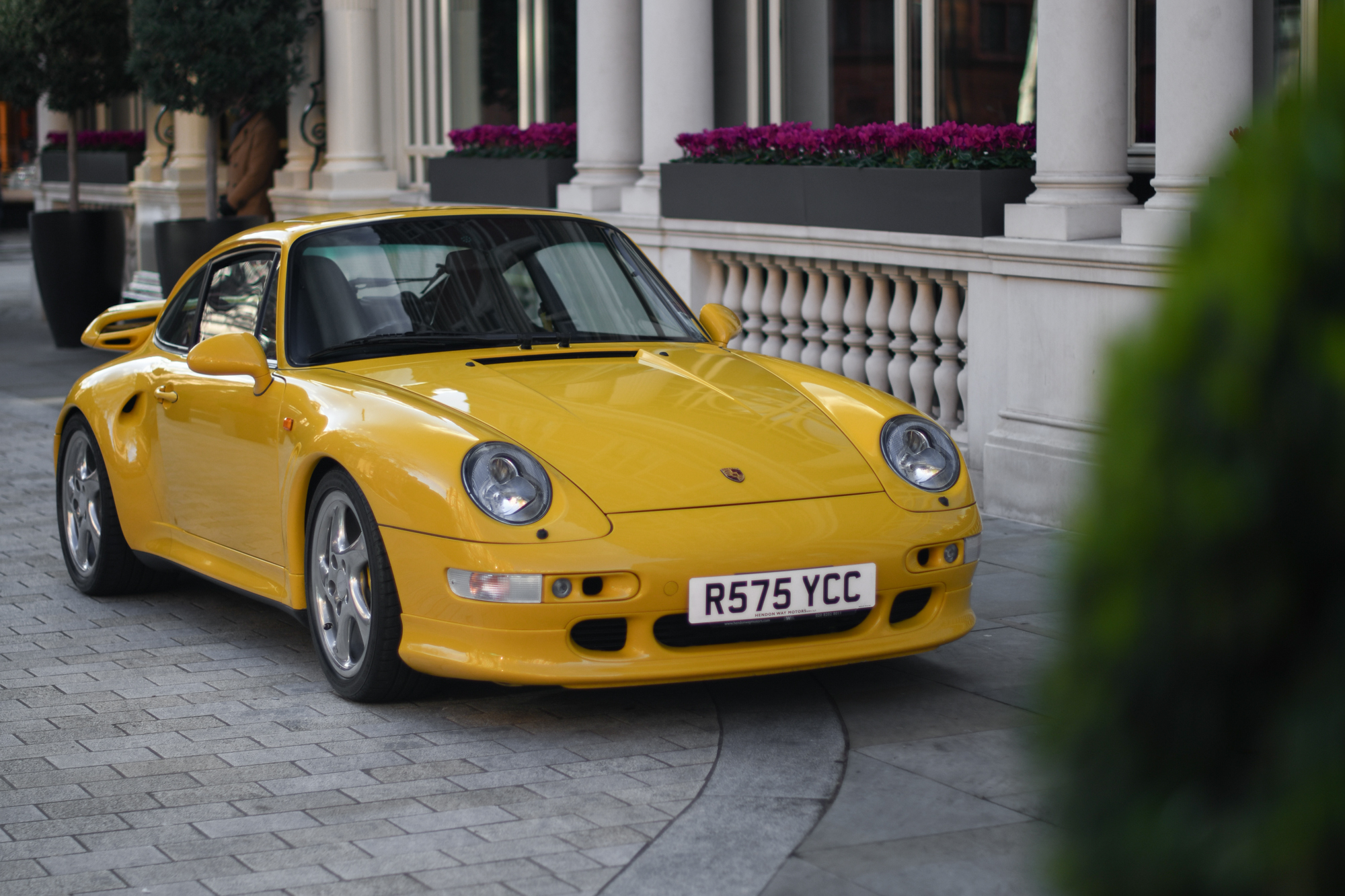 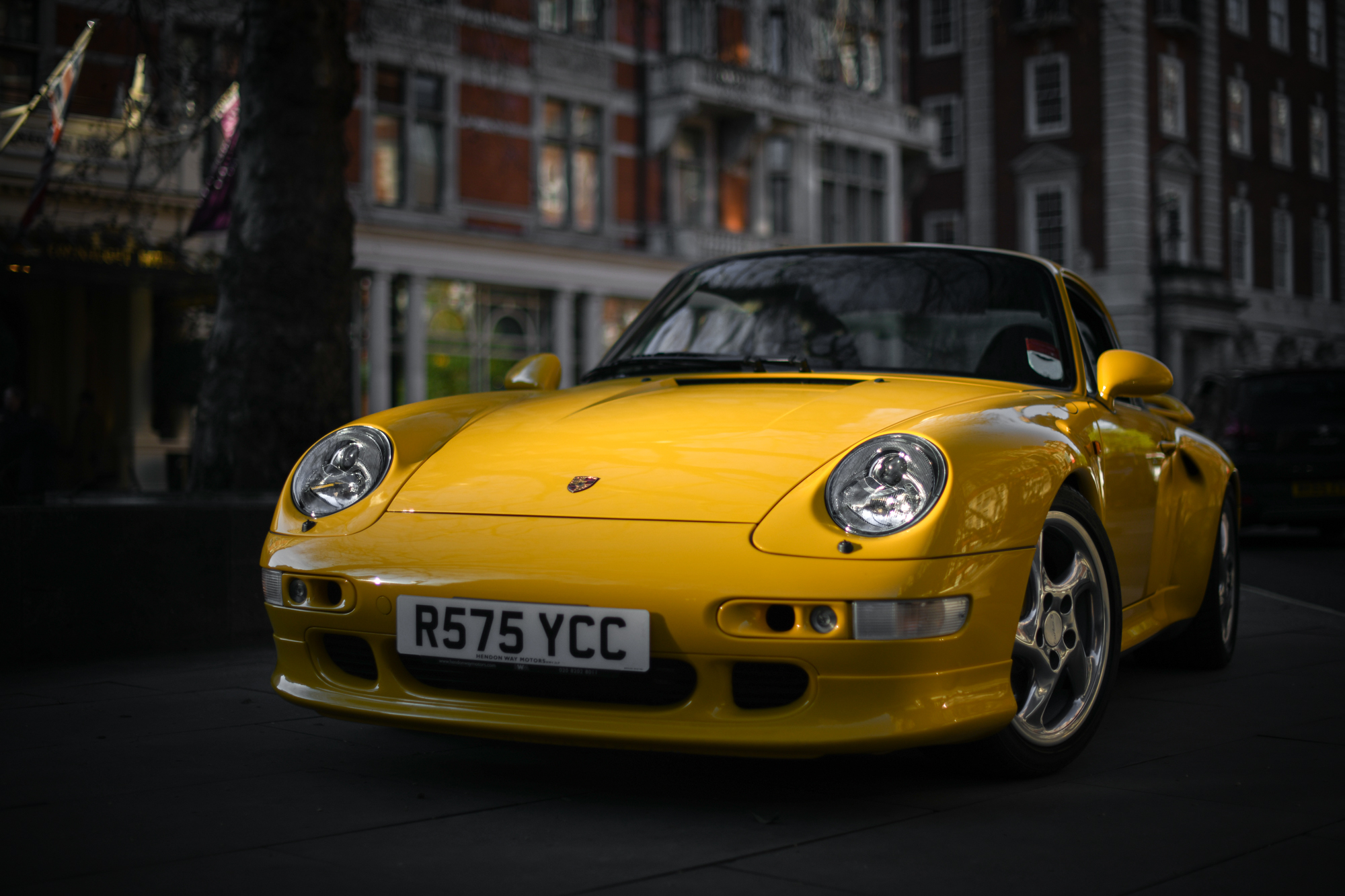 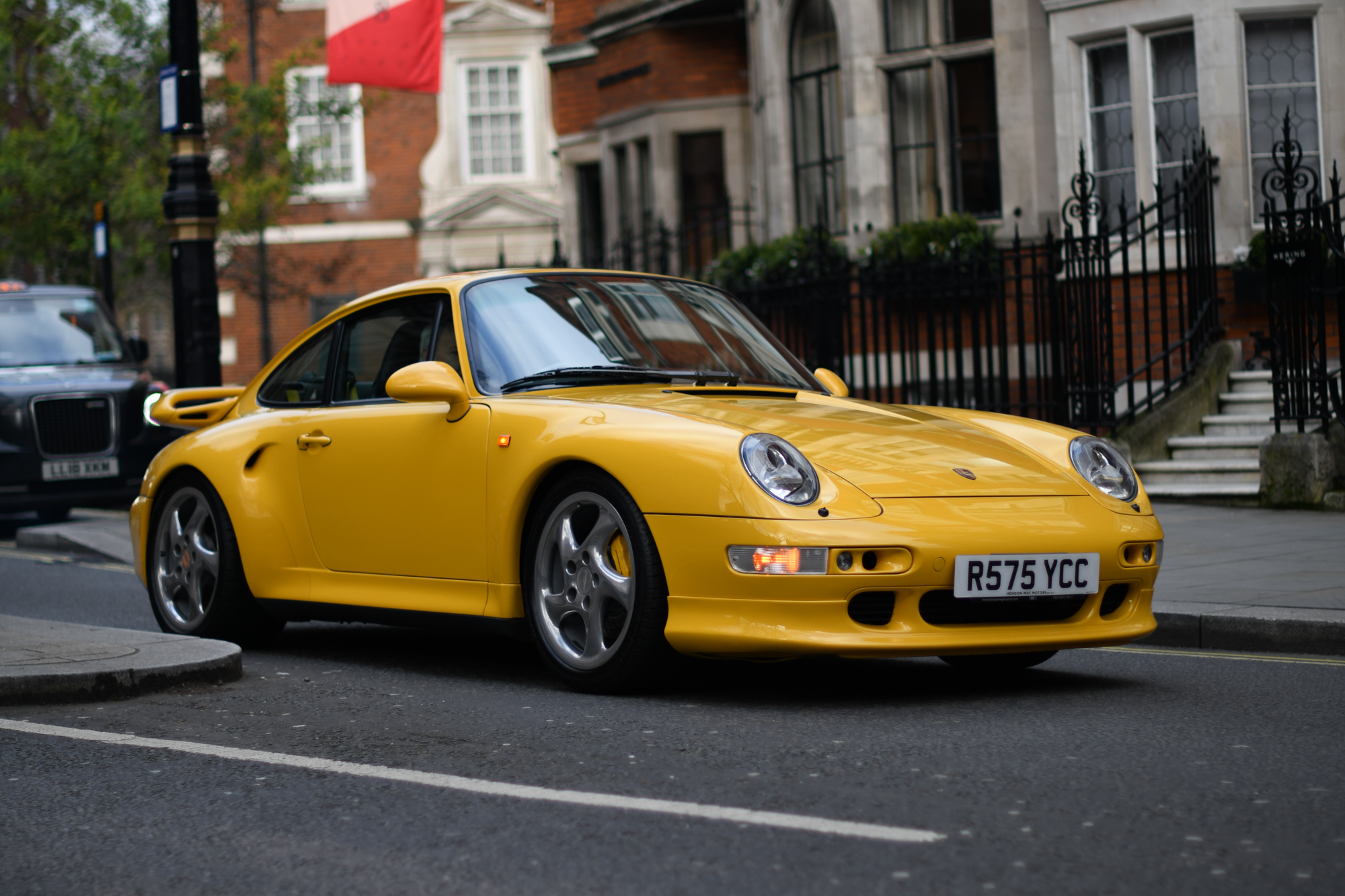 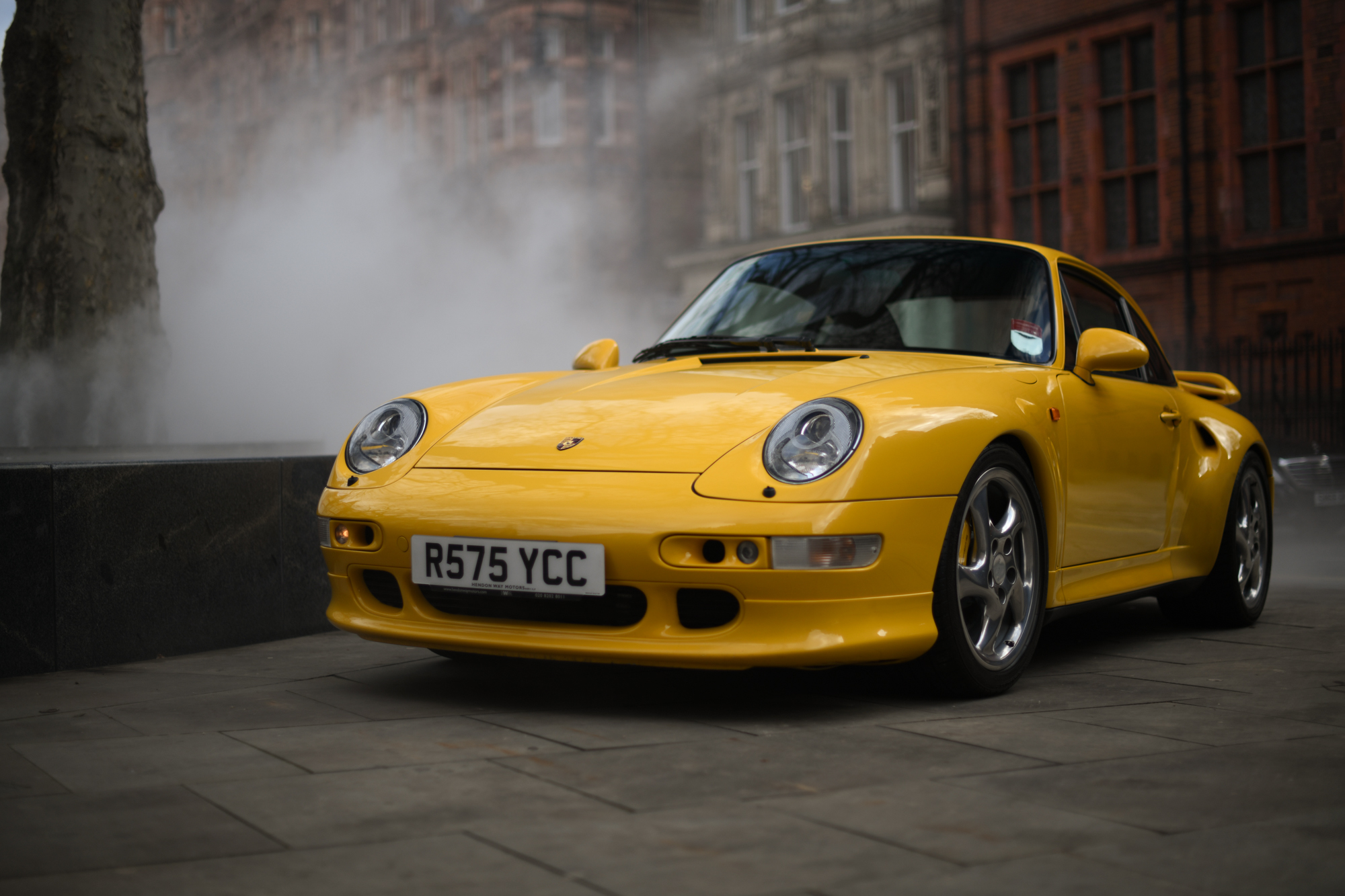 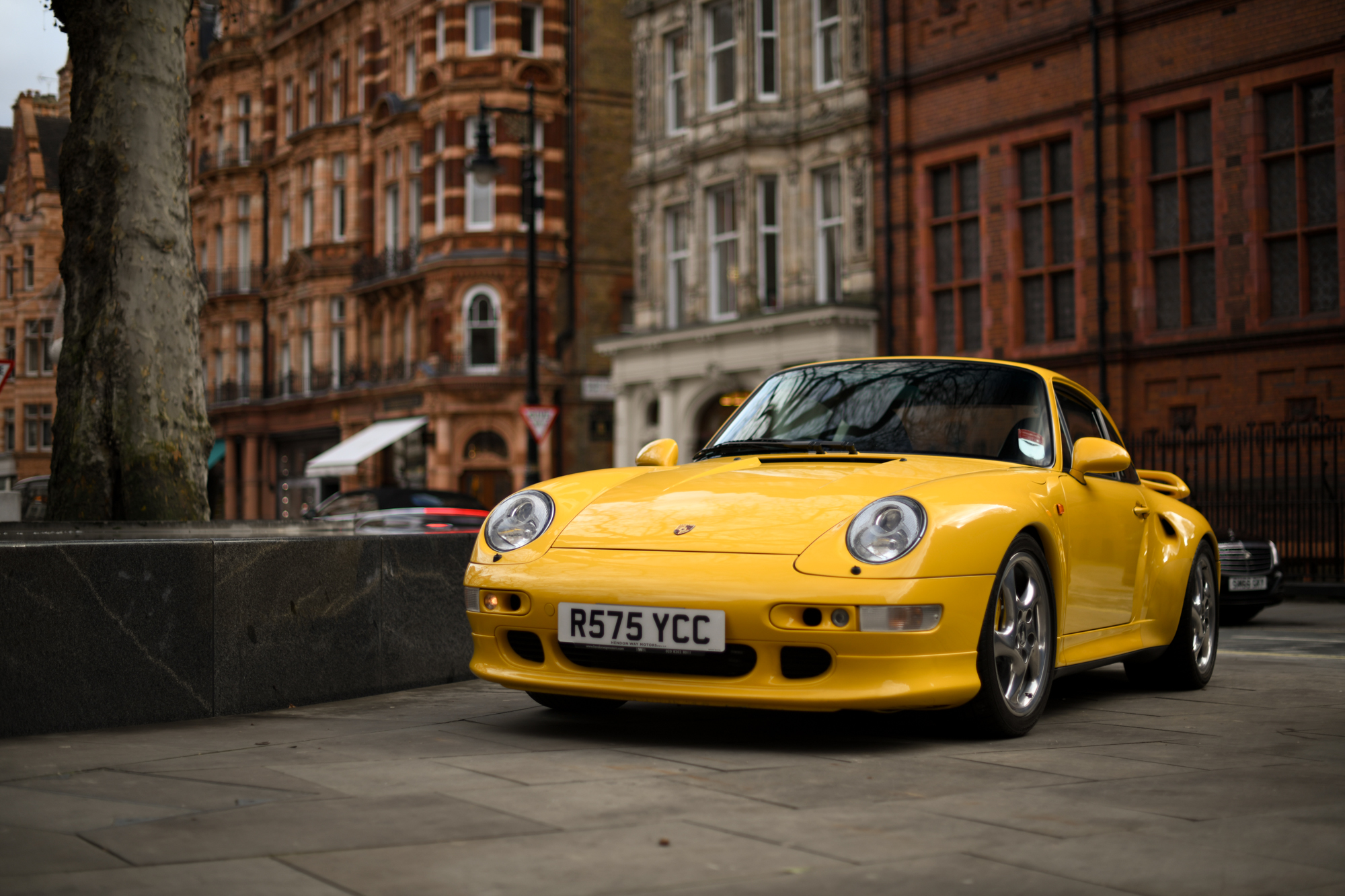 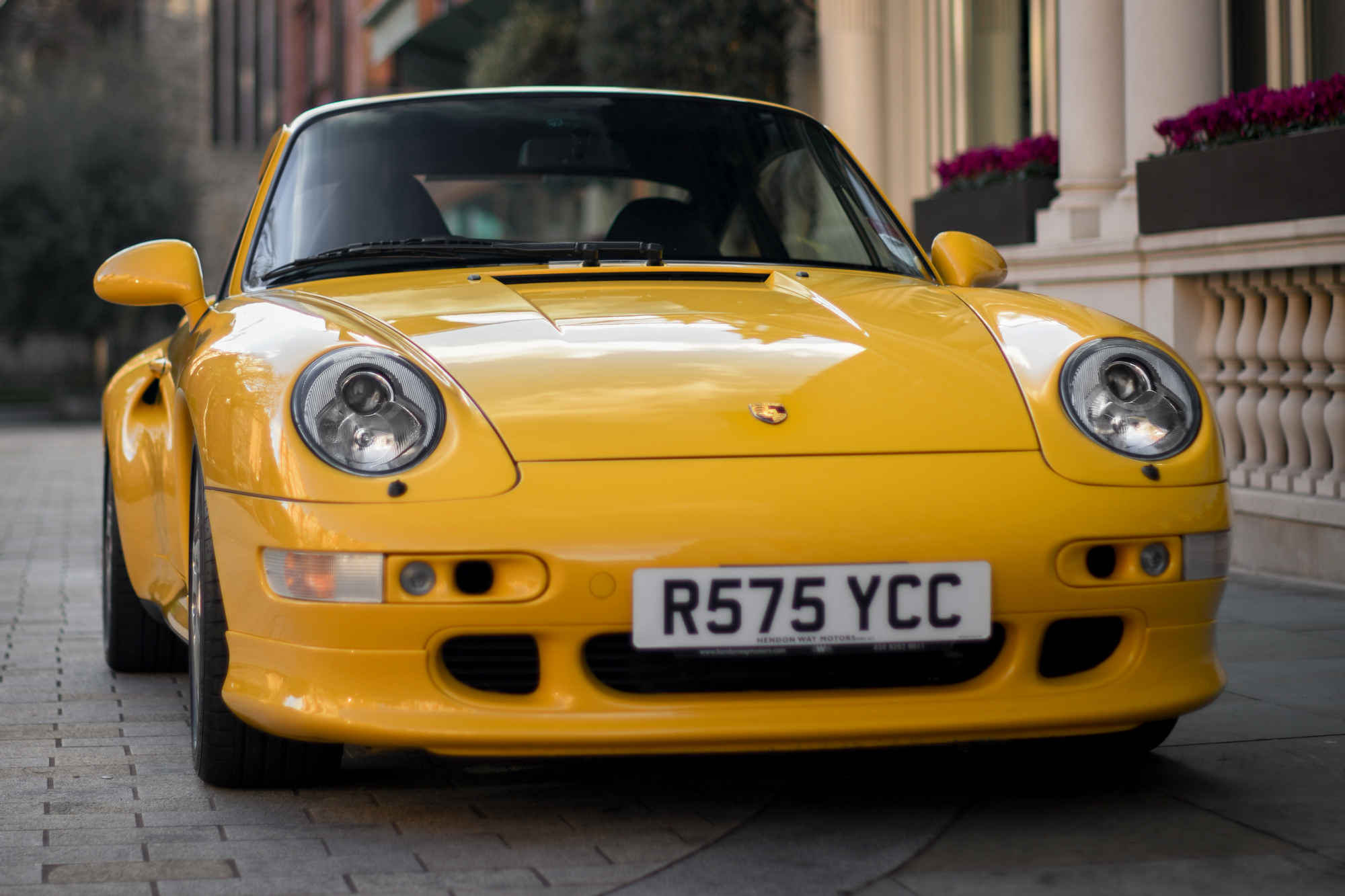 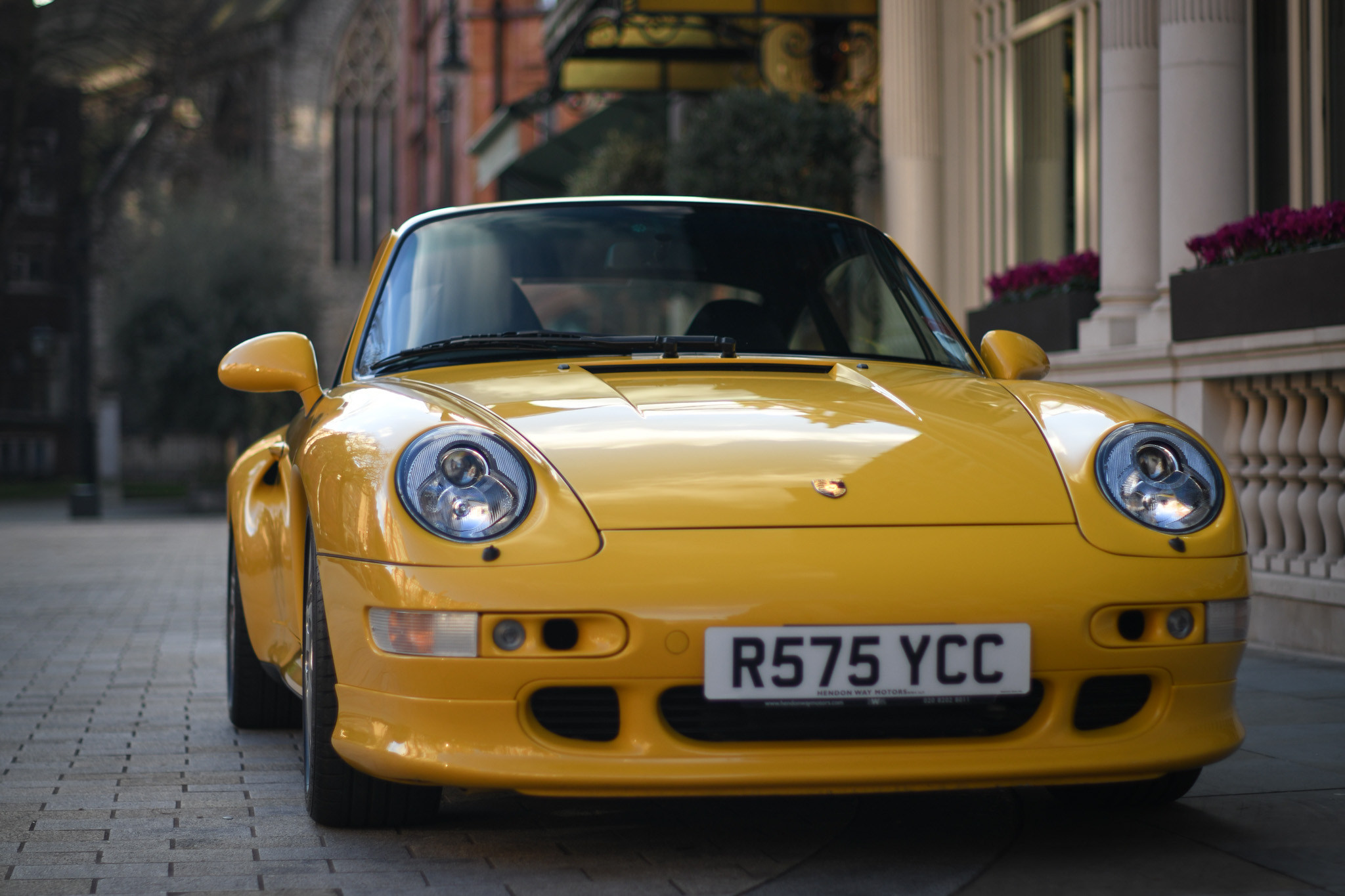 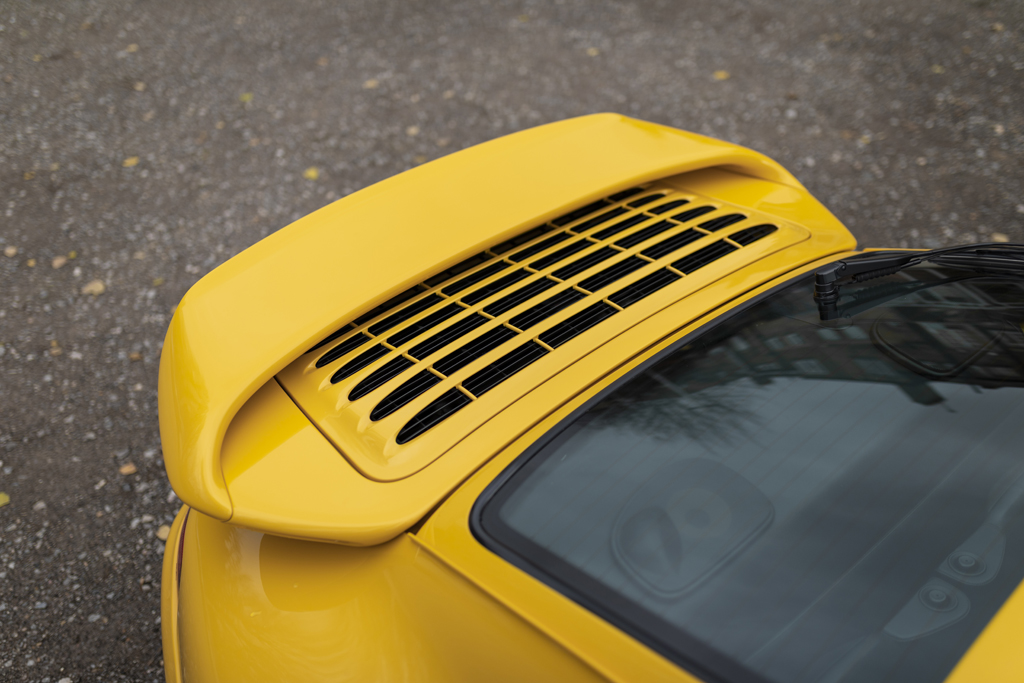 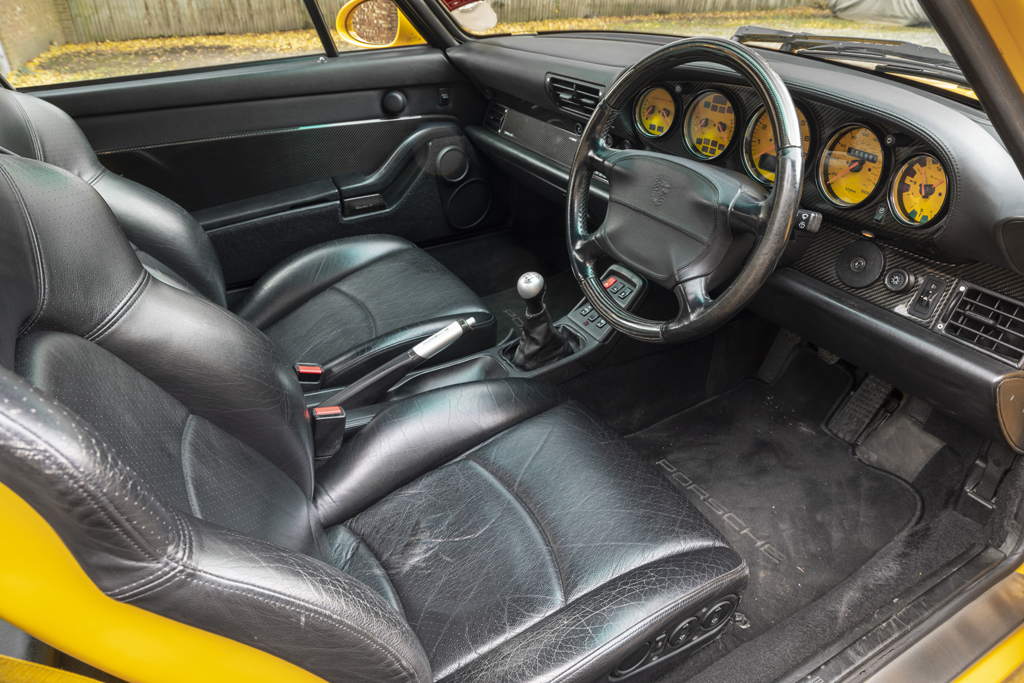 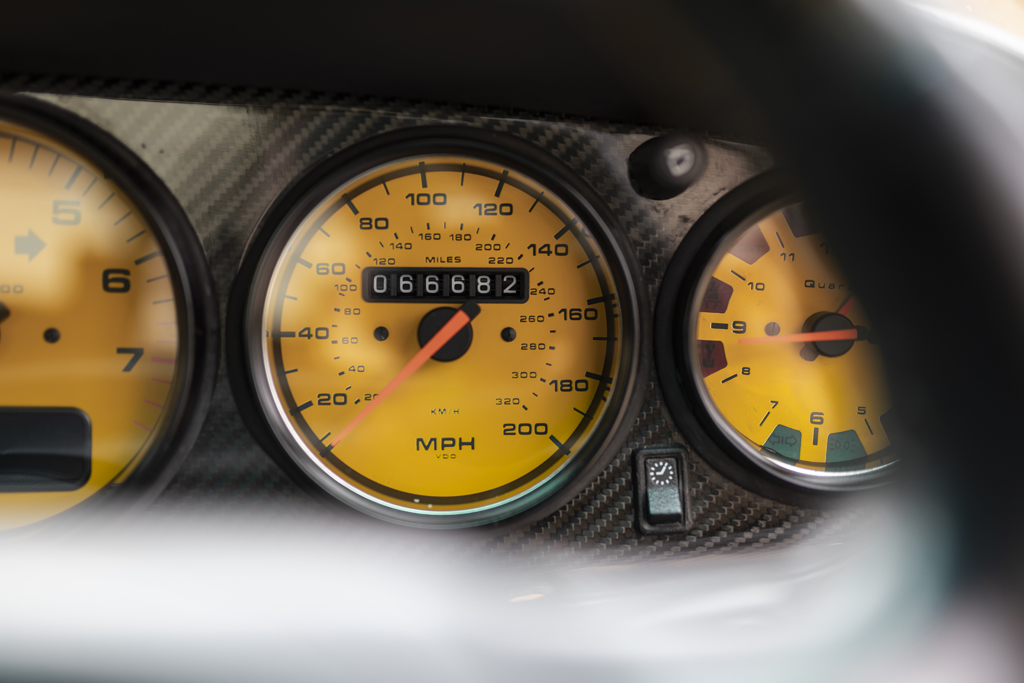 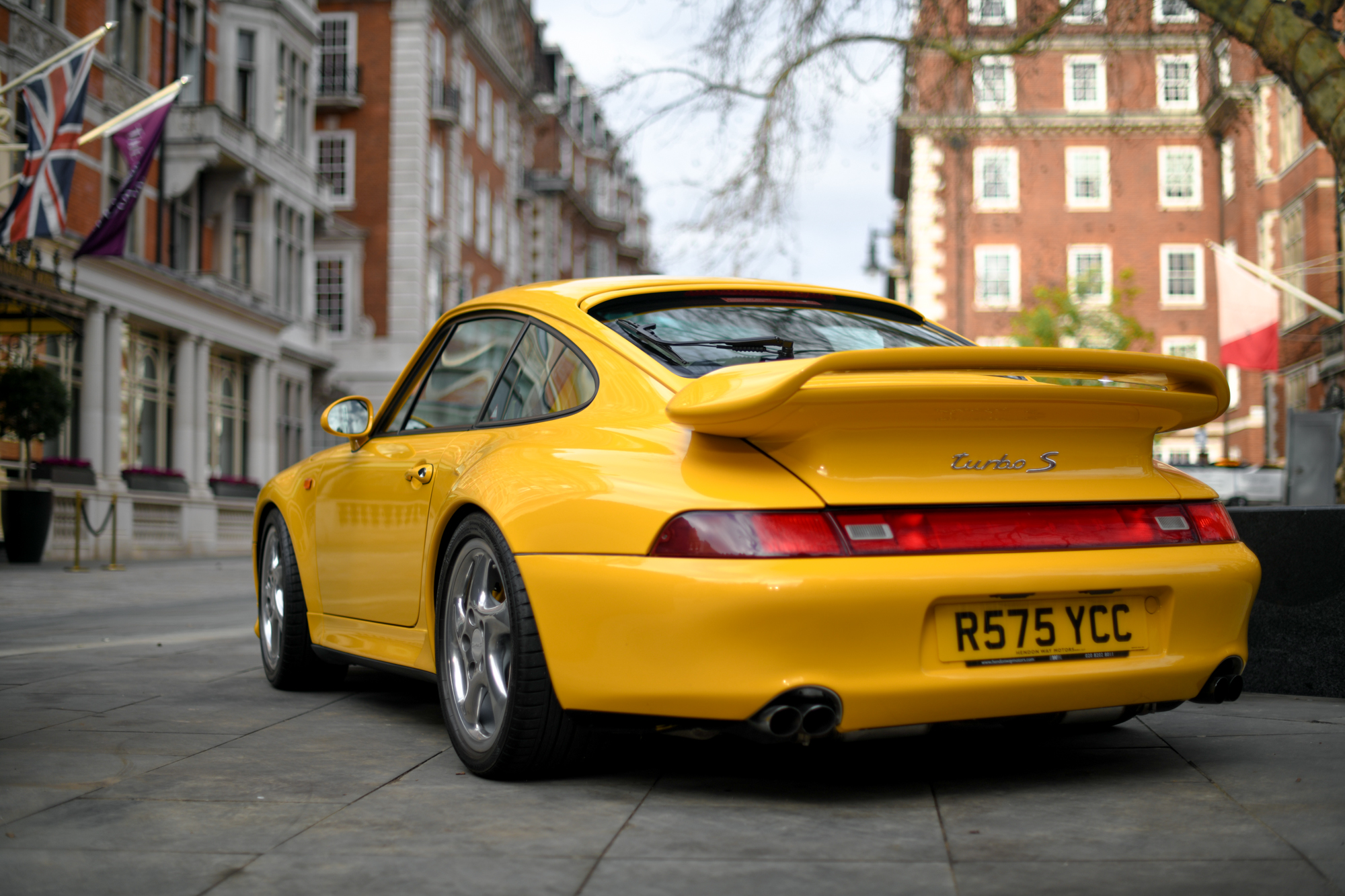 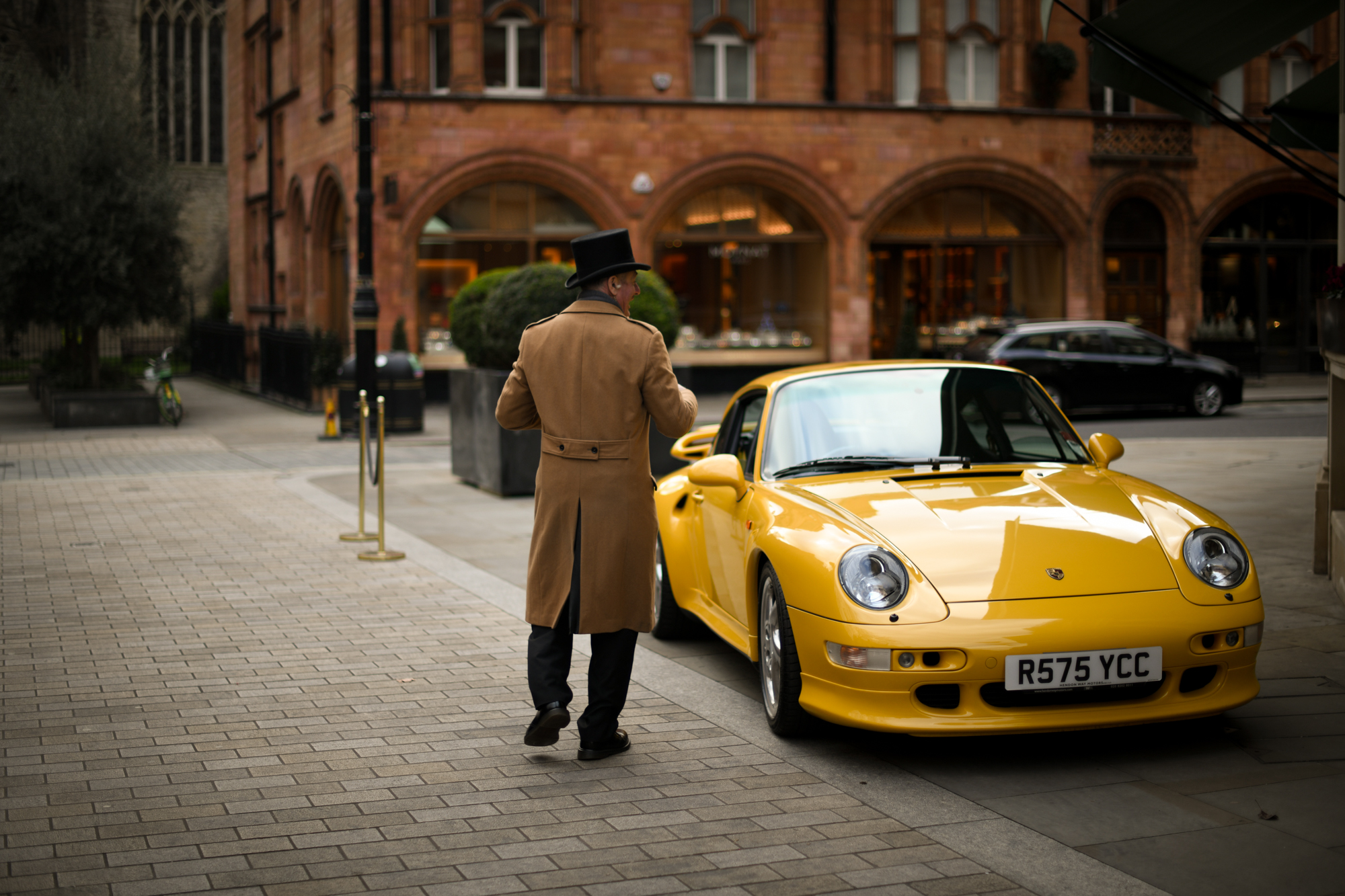 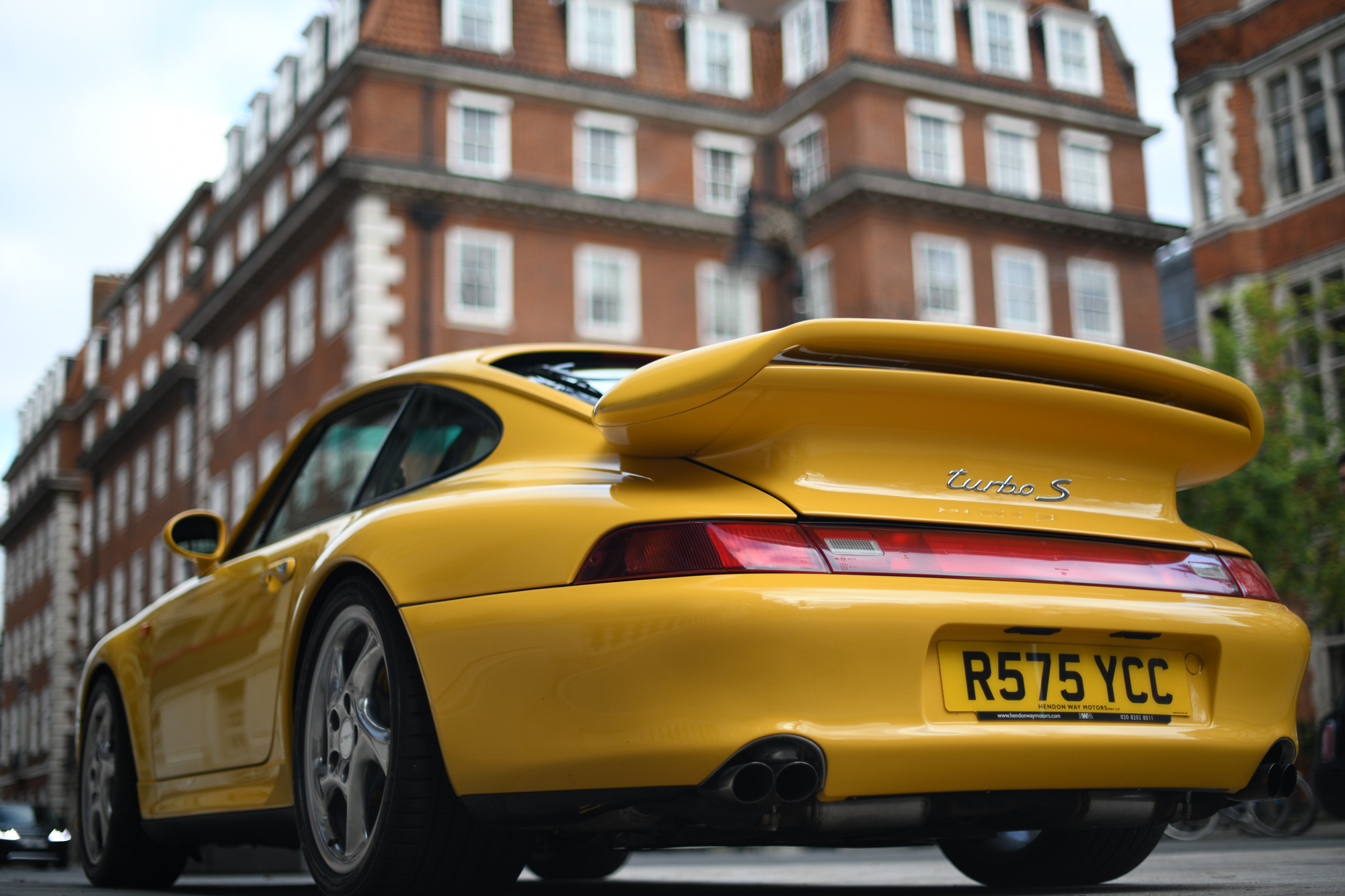 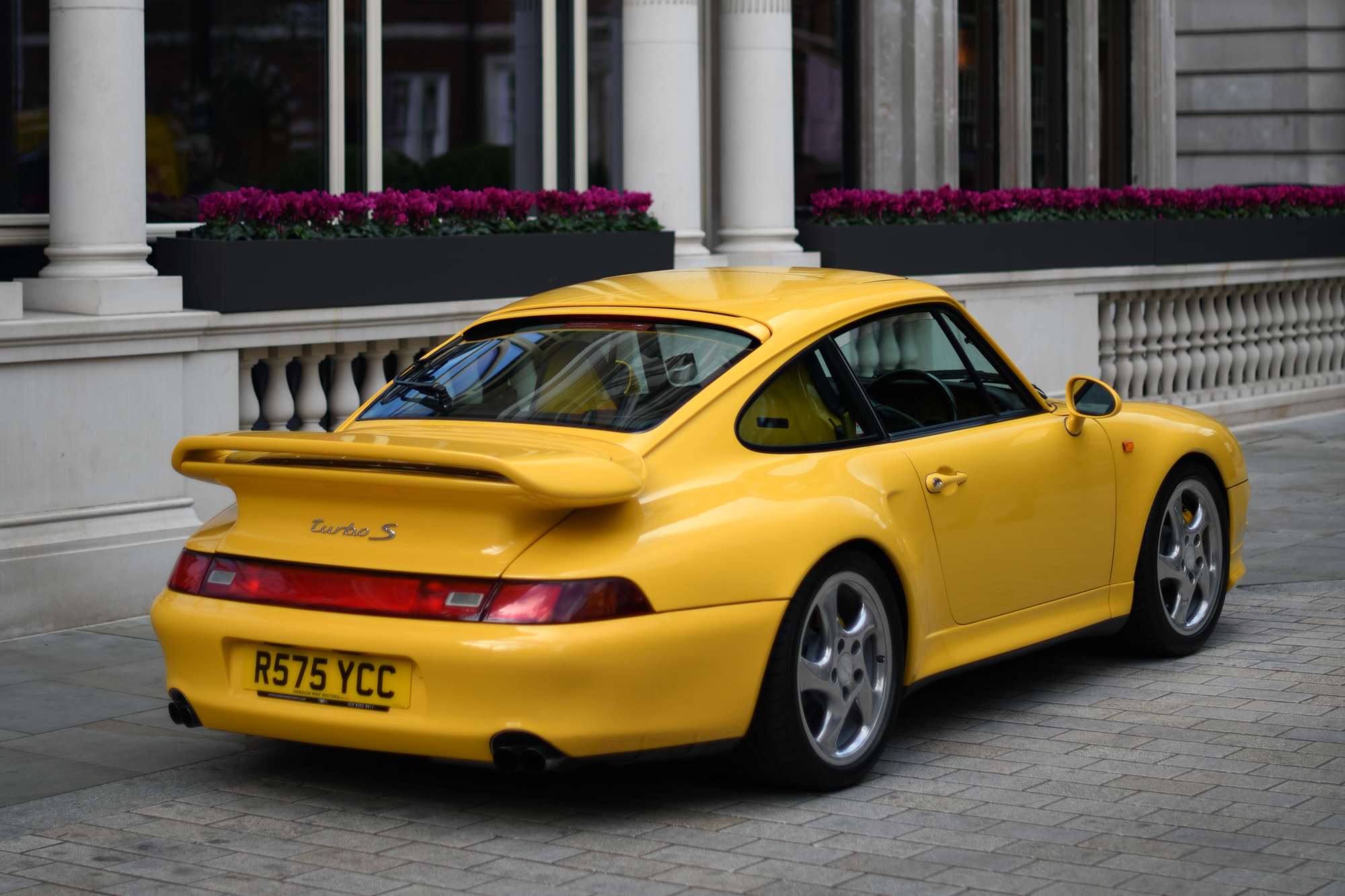 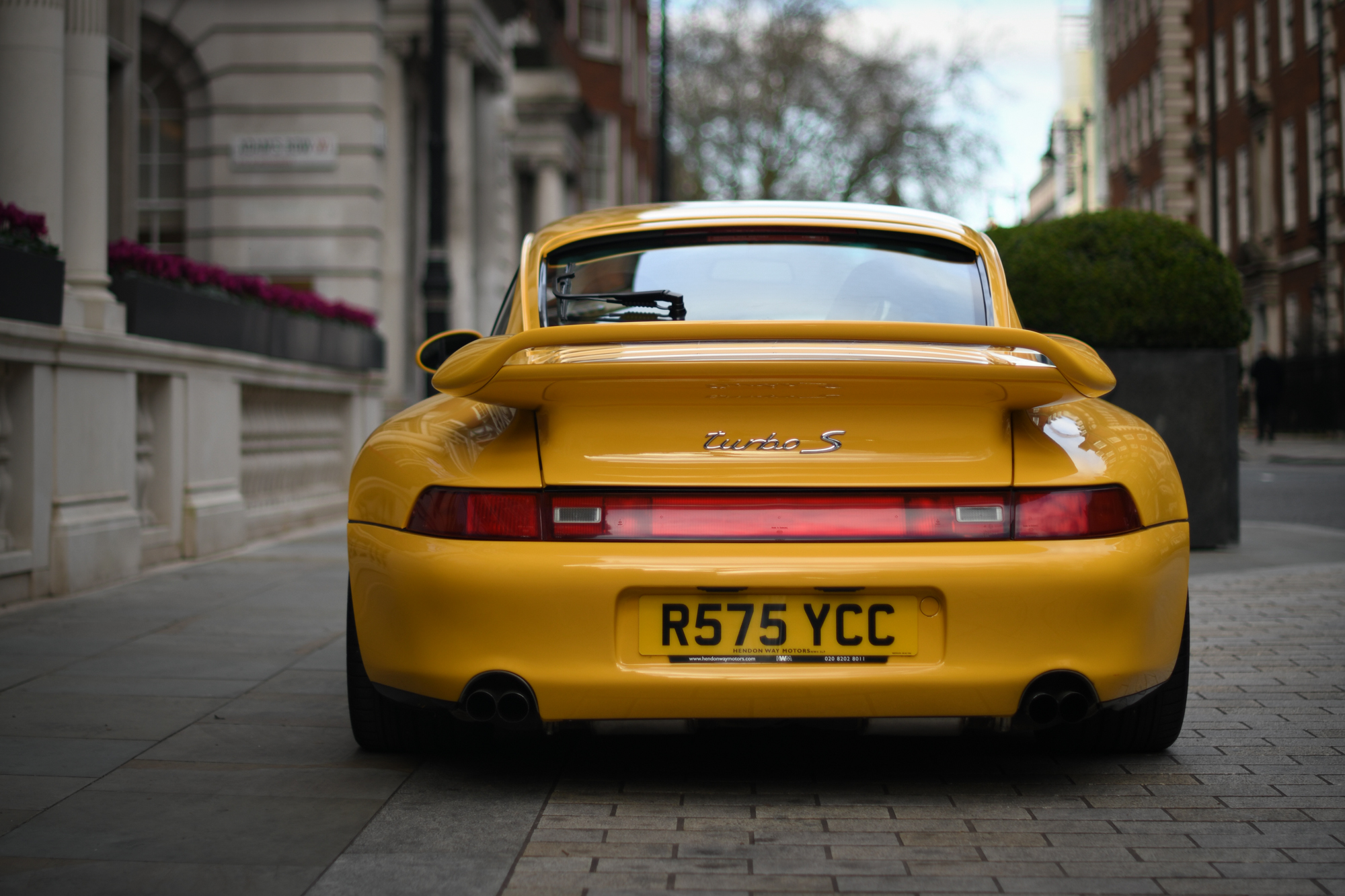 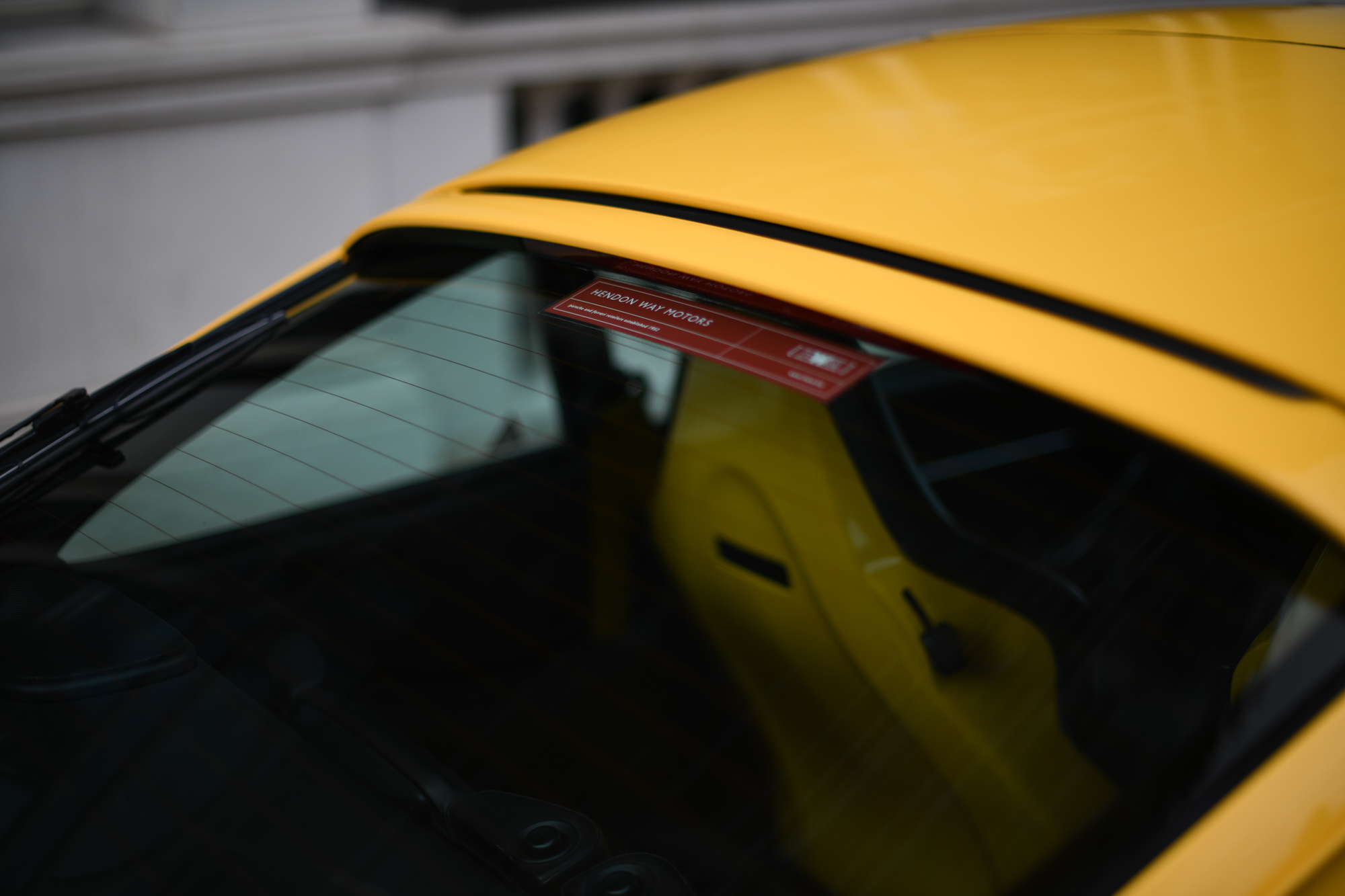 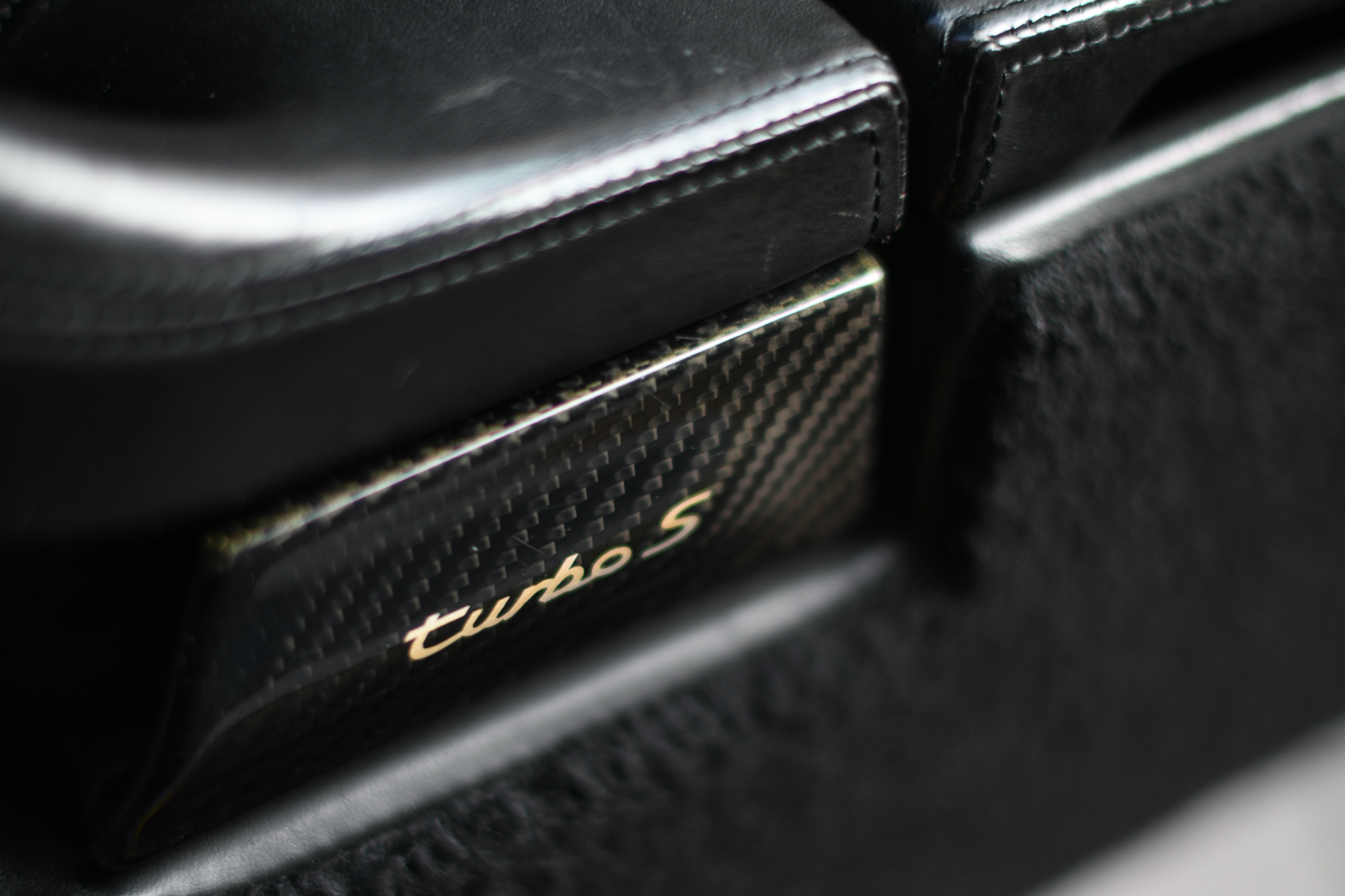 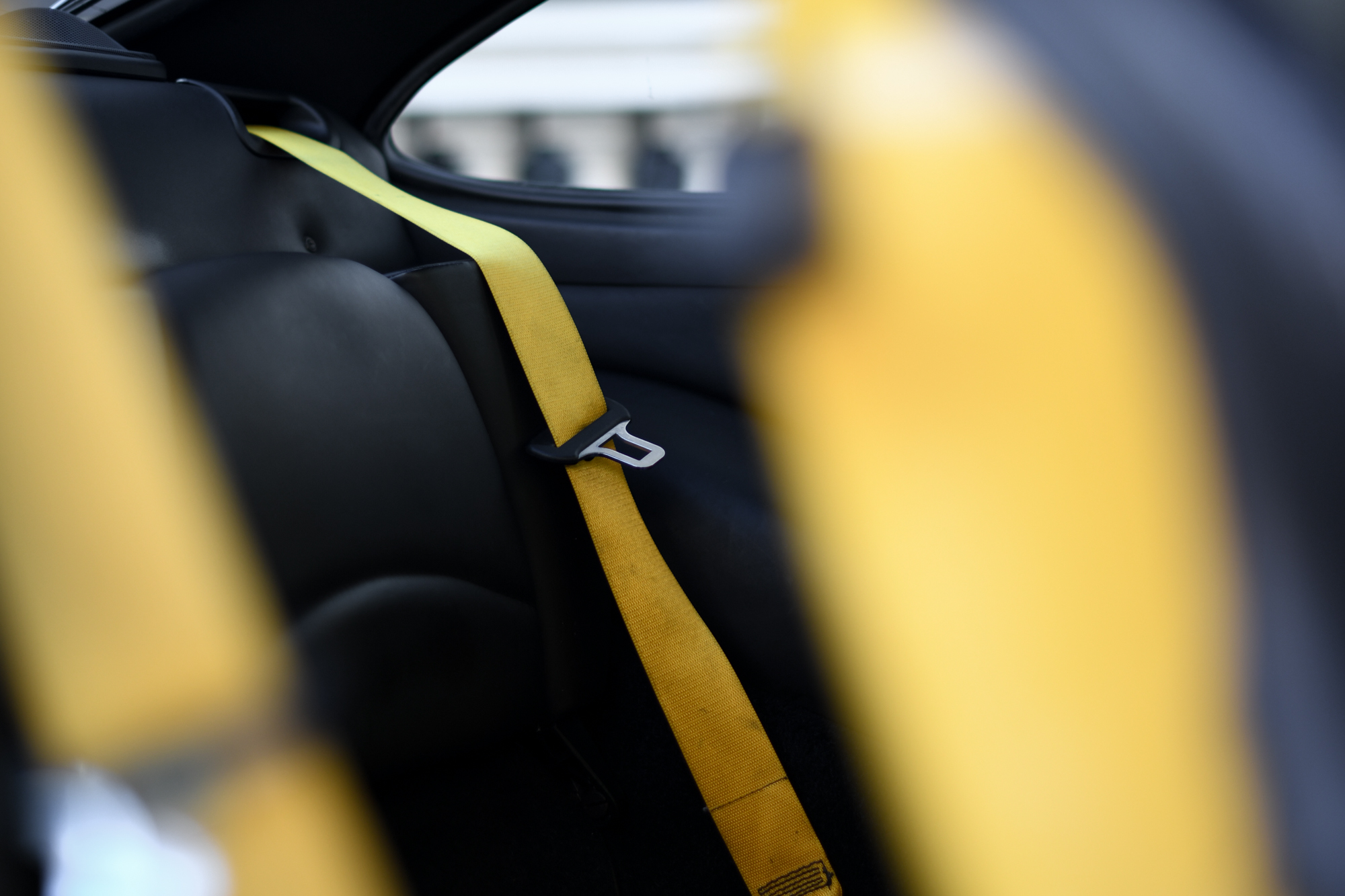 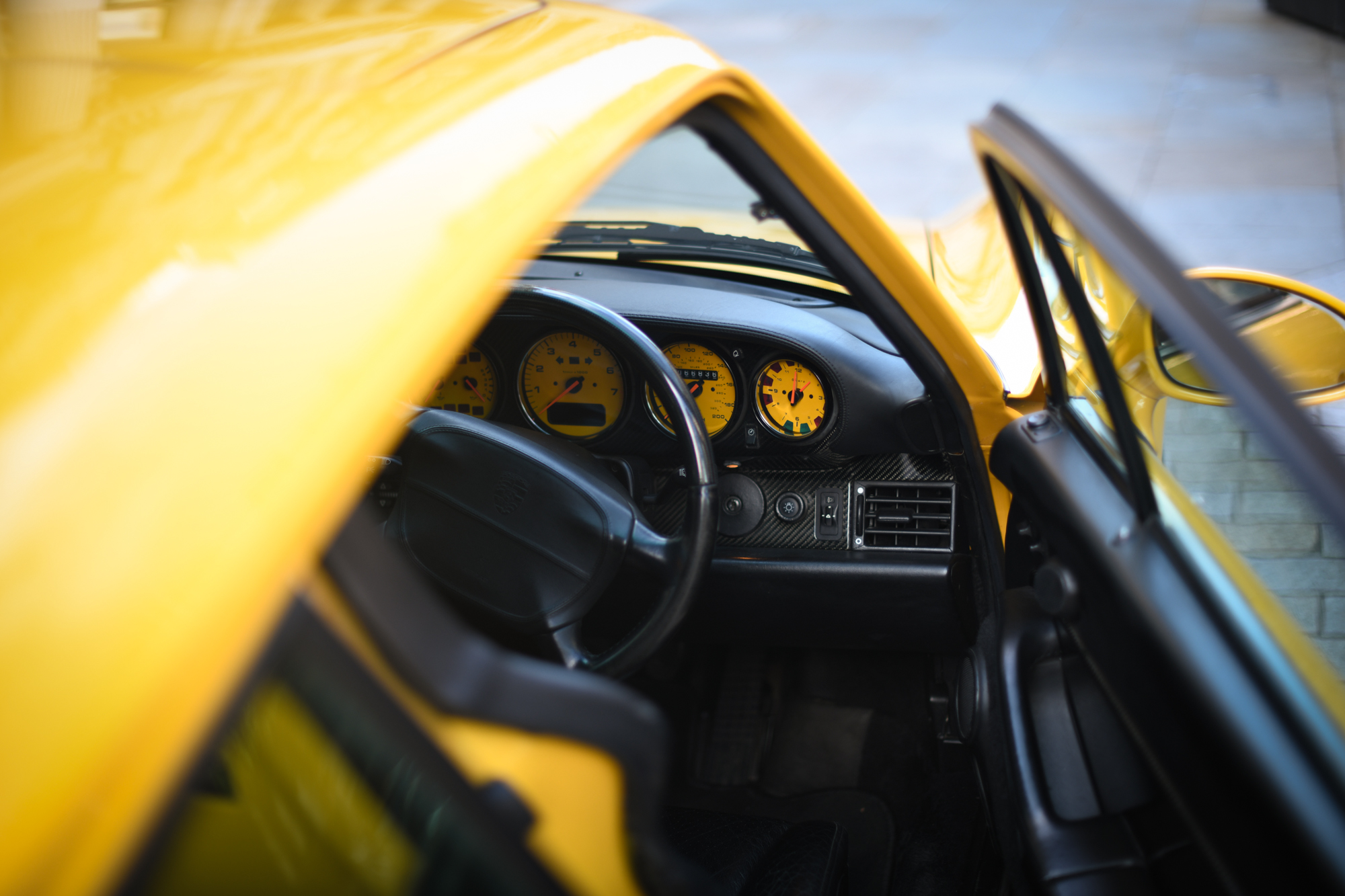 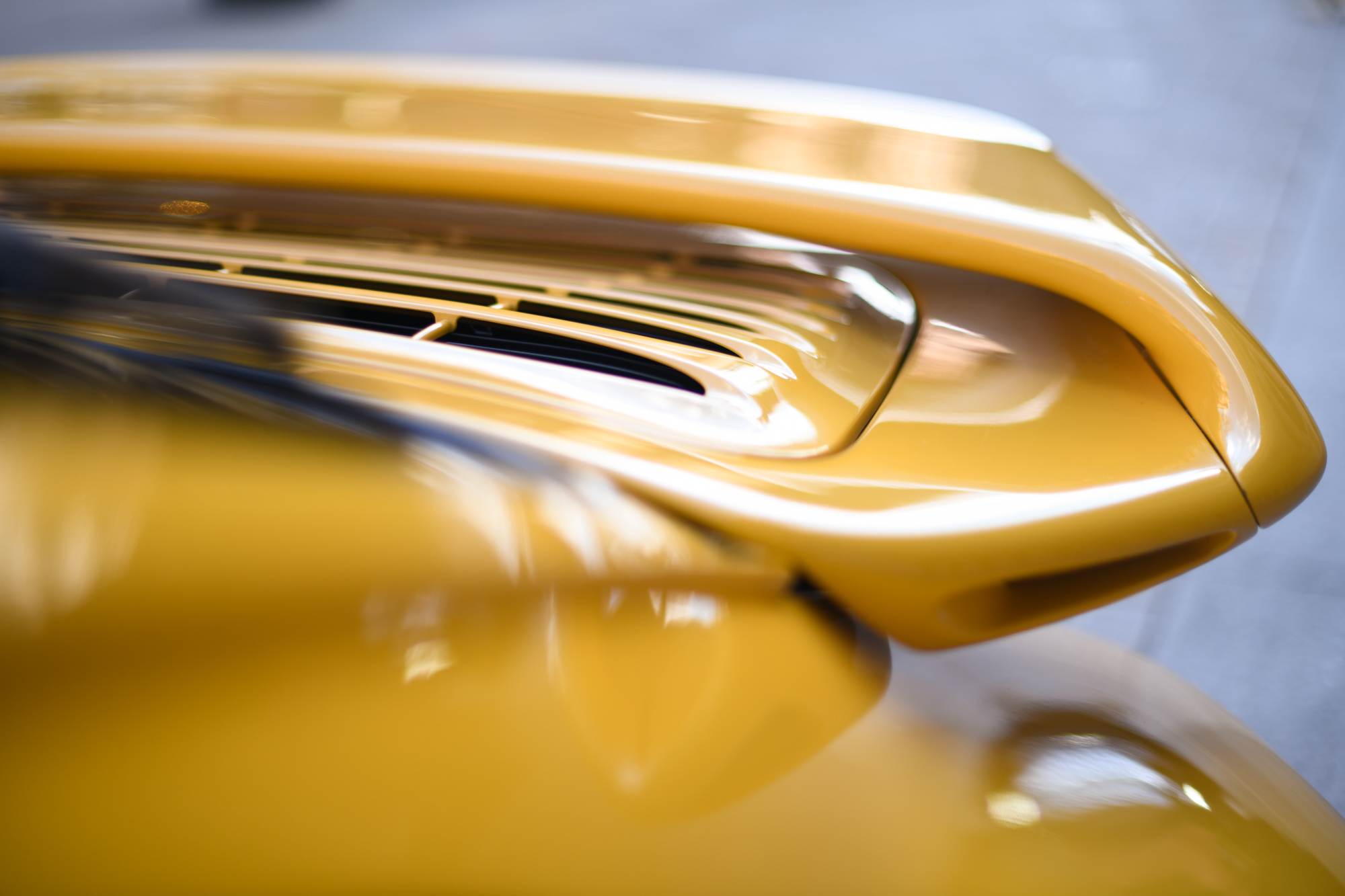 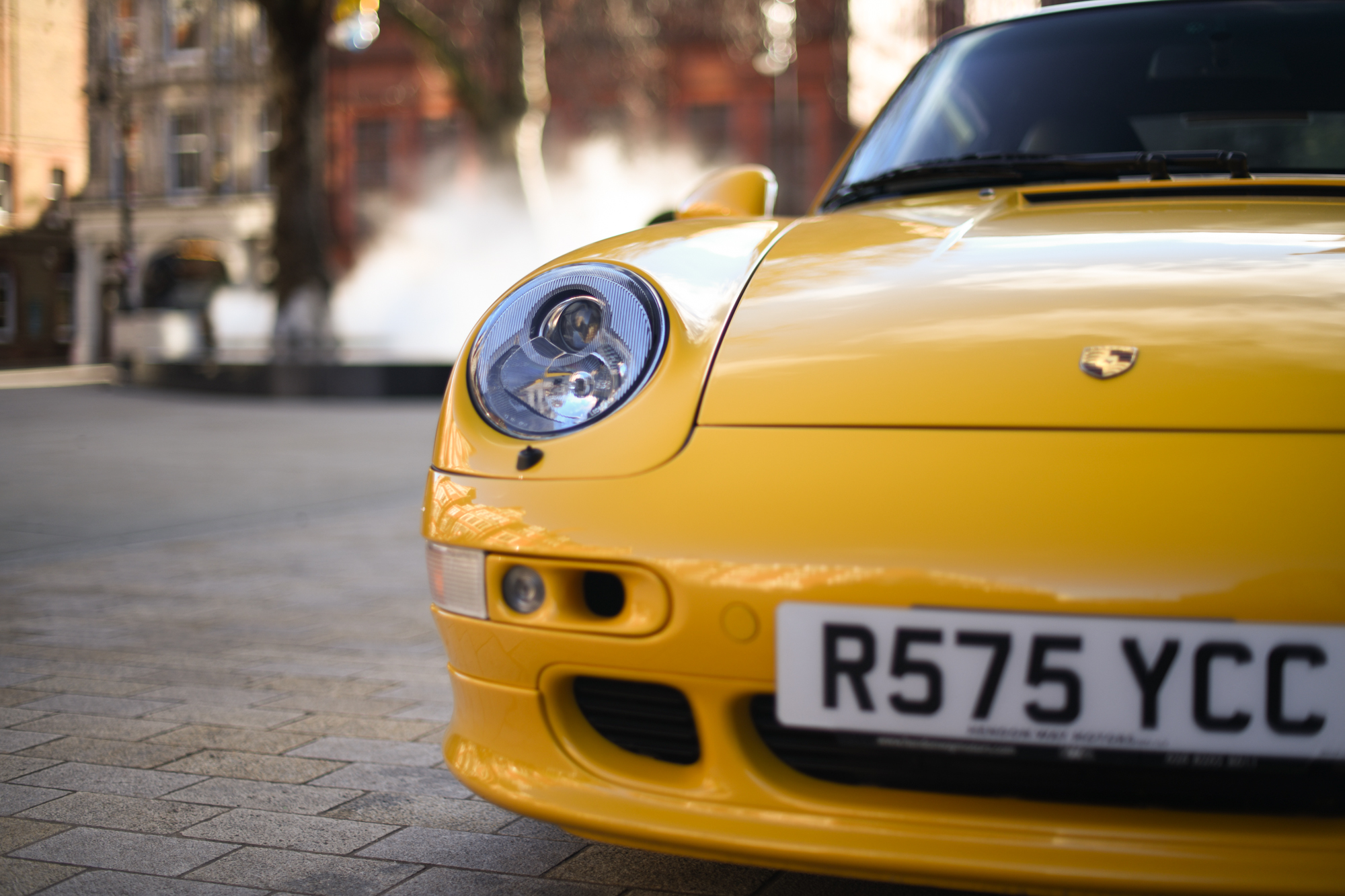 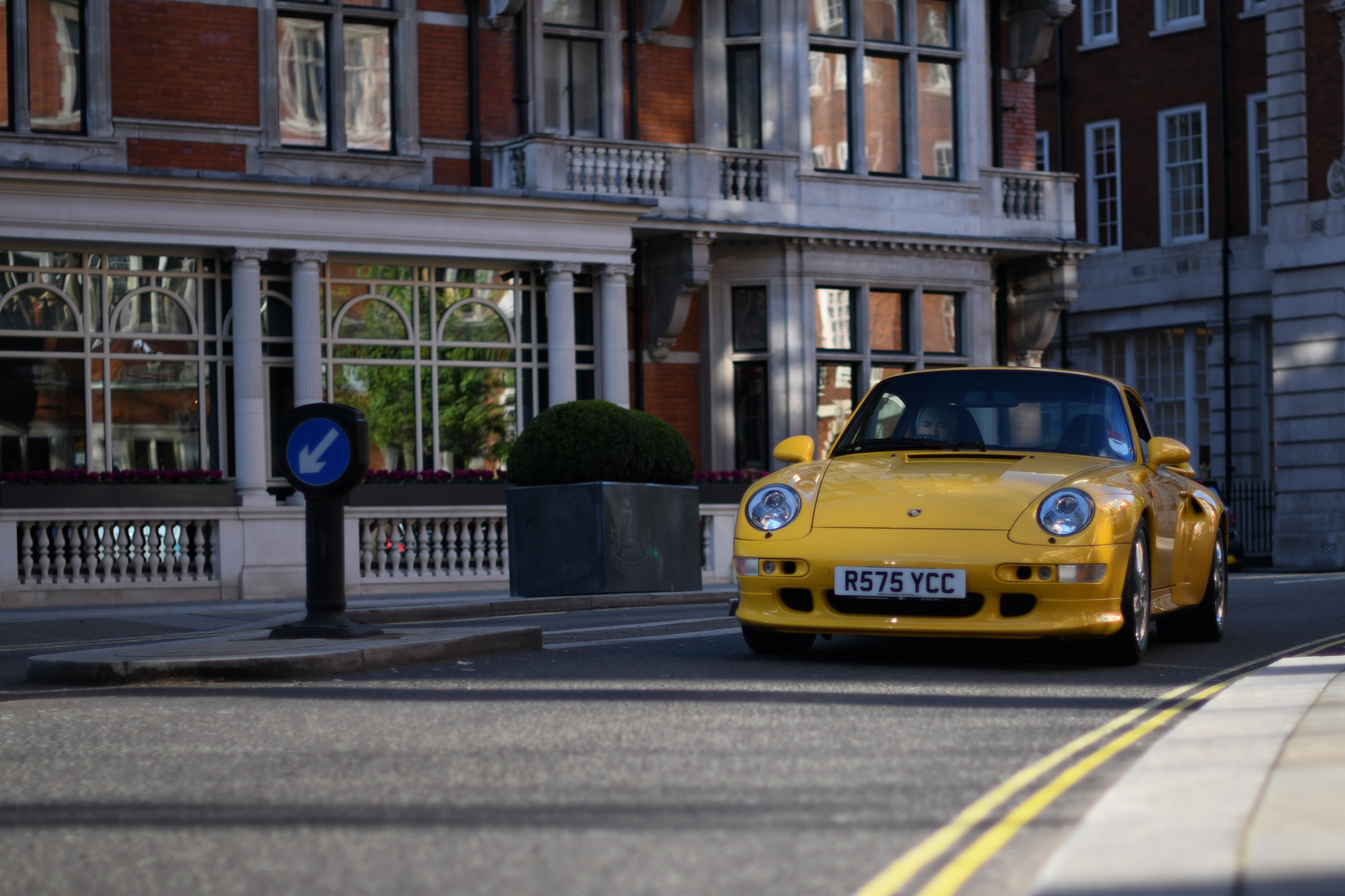 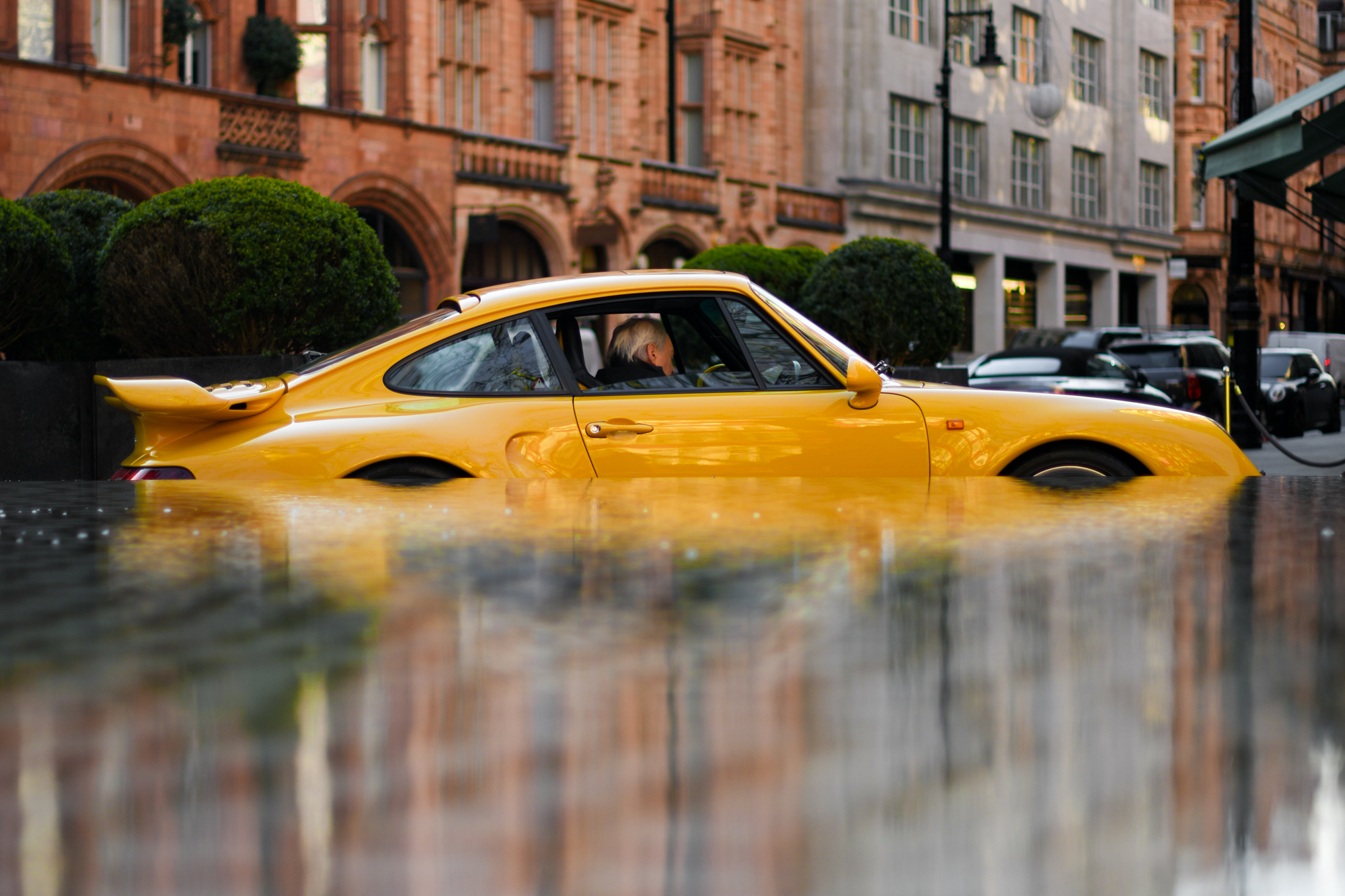 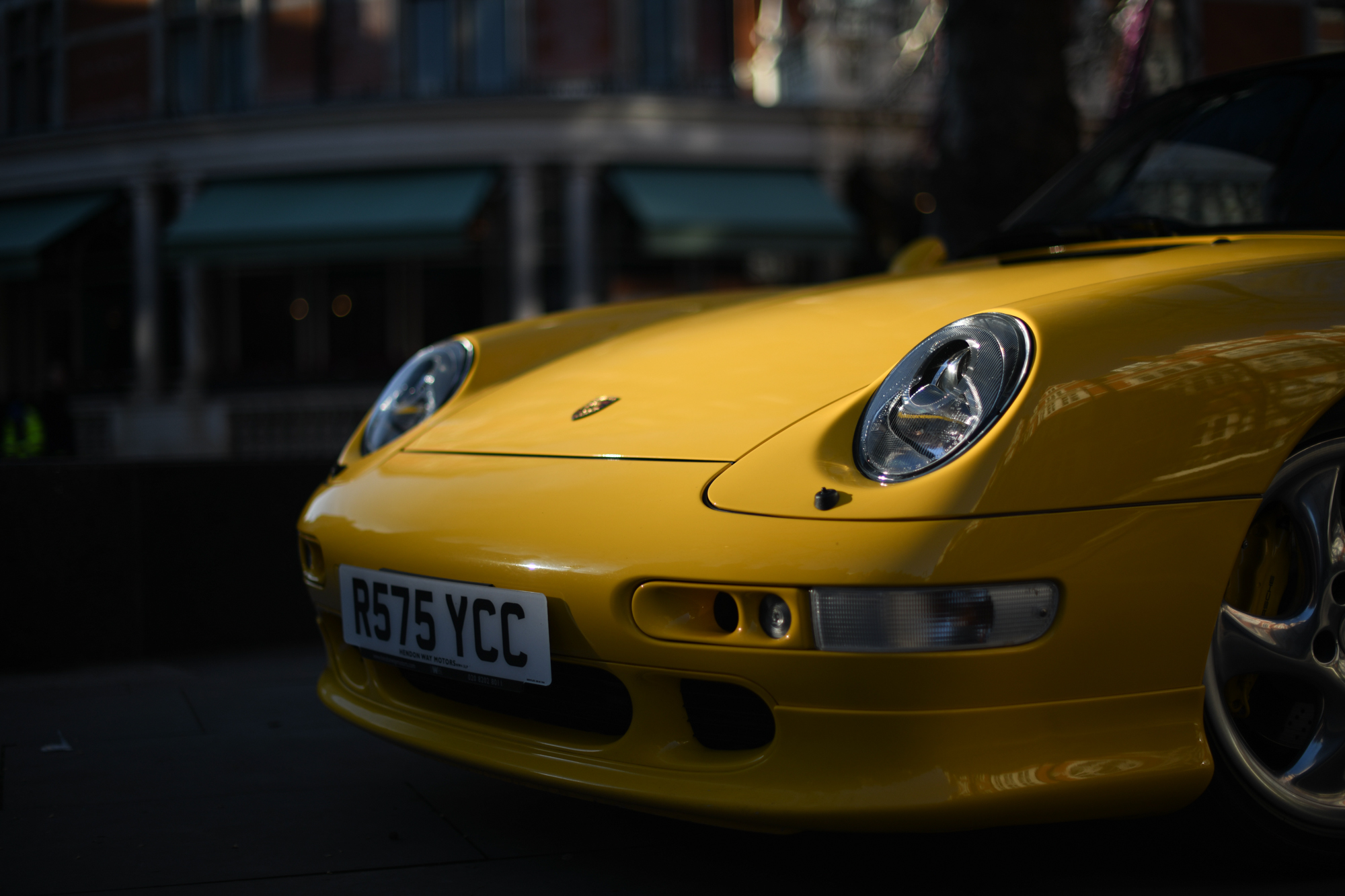 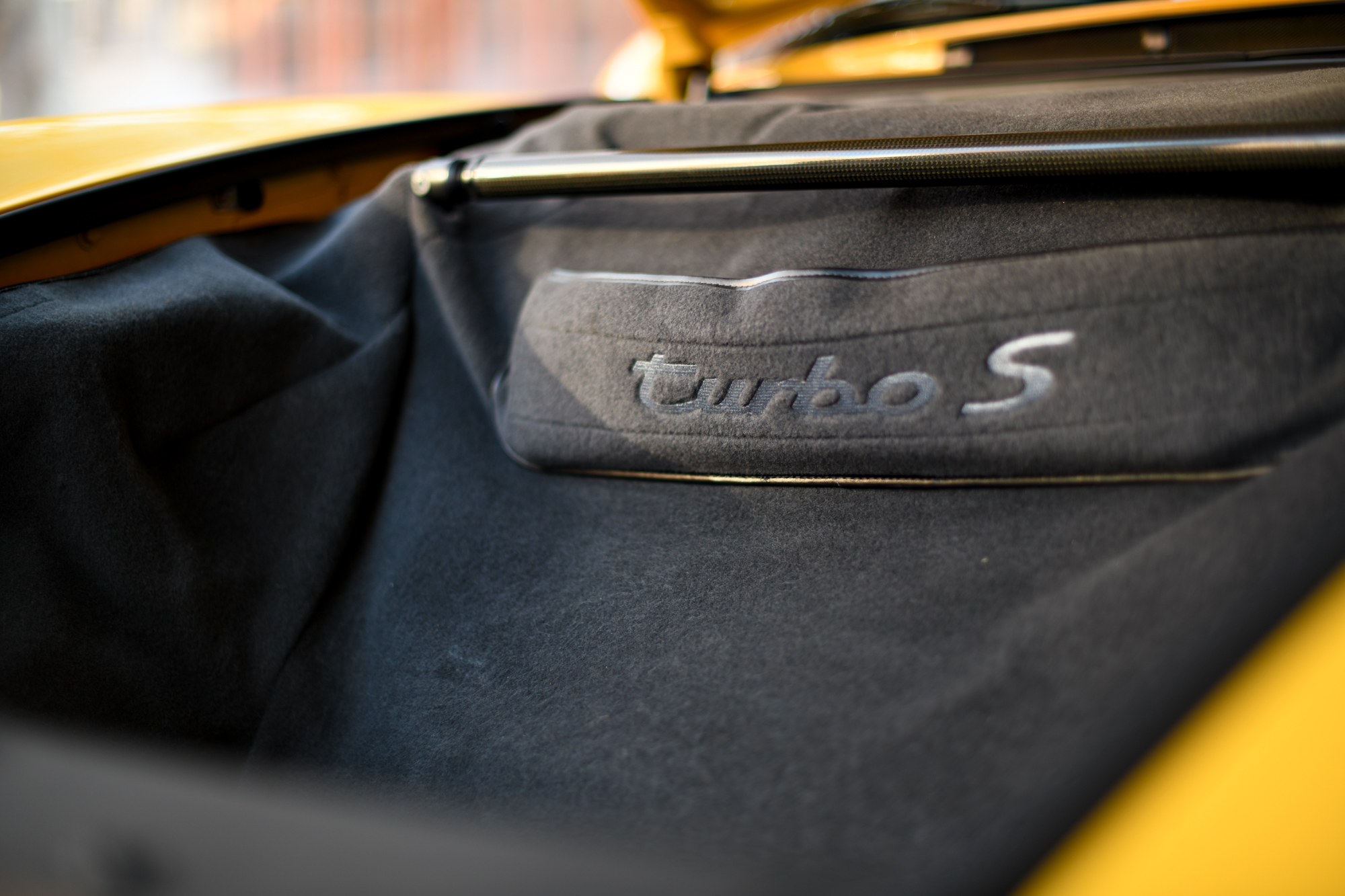 1 of just 23 RHD cars - perhaps one of the ultimate air-cooled turbocharged 911s
Upgrades over the standard 408hp car included bodykit, wing, brakes were uprated and included six-piston calipers
The suspension was stiffer and lower (by 15mm) and the power was upped to 450hp through bigger turbos and a new exhaust
Our chairman has gently evented this car at the St Mawes Classic and the car has featured at numerous shows and events

In the words of our chairman - "A true rocketship and supremely comfortable GT - really great to drive!"

The 993 turbo was introduced in 1995 and featured a new twin-turbocharged engine which brought the output up to 402 hp with the help of air-to- air intercoolers, electronic engine management, and redesigned cylinder heads. The 993 Turbo was the first to feature all wheel drive which was accommodated by wheel arches that were widened by approximately 6cm over the standard 993’s already enlarged arches. Most notably, the rear featured a fixed “whale tale” rear wing which housed the intercoolers and dramatically upped the 993 Turbo’s “cool” factor. The Turbo also featured larger brakes, new 18” alloy wheels, and was one of the first production cars in the world to feature the  OBDII diagnostics system which would later feature as standard on the base 993 models. Thanks to a host of updates and firsts, the Turbo is an exciting drive but the all wheel drive system means the car still feels in control.  Later production models featured a few key differences that improved upon the 95-96 years; stronger transmission input shafts were better able to handle the immense power in partnership with the AWD system. They also featured a modifiable ECU, motion sensors for the alarm, and “Turbo” emblazoned wheel caps.

Considered by many to be the last of the ‘classic’ 911s, this Turbo S had an original production run of 345, of which only 23 were RHD. The 993 Turbo S was the first 911 with permanent four-wheel drive but the last with an air-cooled engine so in a way, it marks a transition in Porsche’s line-up. The Turbo S was upgraded over the standard Turbo to include a body-kit, wing, and updated brakes - six-piston callipers. The suspension has been stiffened and lowered by 15mm, and the bigger turbos and new exhaust take the power up to 450hp.

This particular Turbo S  is finished in its original Speed Yellow, as it was delivered from the Porsche Factory, and has only done 66,000 miles. The bodywork is in pristine condition unblemished by scratches, major marks or dents and the coachwork remains without chips, cracks or any sort of damage. Many elements of the interior match the beautiful Speed Yellow coachwork. The black leather seats have matching speed yellow hard backs and seatbelts, and the instruments in the dash are also finished in speed yellow. All the leather and the fittings are in exceptional condition with no tears or holes, evidence of careful and considerate use by its owners. It also features litronic lights, heated seats, electric mirrors, a Porsche CD Radio head unit, an upgraded sound system, a self-dimming rearview mirror, a sunroof, yellow brake callipers, aerokit front splitter and rear spoiler, the carbon fibre reinforced suspension strut, 18” chrome Turbo S alloy wheels and a full service history with recent Official Porsche Major Service.

Our Turbo S has recently undergone an extensive “4 corners” nut and bolt rebuild by Tony Walker who spent most of his career at the prodigious Porsche Centre in  Hatfield and is therefore presented like new. Every single milimitre of the car has been meticulously worked over and brought up to concours standard. The consumables have been replaced and four special order Turbo S shock absorbers were ordered from Germany alongside new brake discs and pads (front and rear), shims, and sensors. Most sections of the suspension have also been renewed, including the uprights, the bushes and any other related replaceable and worn parts. The car was then sent away to have the suspension set up and aligned so as to match all the new parts, thus  giving this Turbo S the best ride possible. We do not believe that anything else on the underside or the consumables warrant any replacement, in virtually all respects this vehicle is like new. There simply isn’t a better Turbo S on the market, and we aren’t the only ones who recognise its truly remarkable condition. This Turbo S has enjoyed widespread media coverage in numerous Porsche Publications, even making the cover of GT Purely Porsche in April 2005 and featuring in the April 2013 edition of Total 911 magazine. The vehicle has been singled out as an exceptional find as recently as May of 2020. The editor in chief of Total 911 took the car out for the day and his findings feature prominently in the June 2020 issue. This Turbo S has been a contender in several concours exhibitions. Most notably, it was awarded Best in Class by Bonhams at St. Mawes, and was presented with the 911 Best in Class by Derek Bell as part of the Porsche 70th Anniversary year of Salon Prive at Blenheim Palace. 1 of just 23 RHD cars, this provenance-rich, stunning example of the ultimate air-cooled, turbocharged 911 would be a collection-making car for any enthusiast.