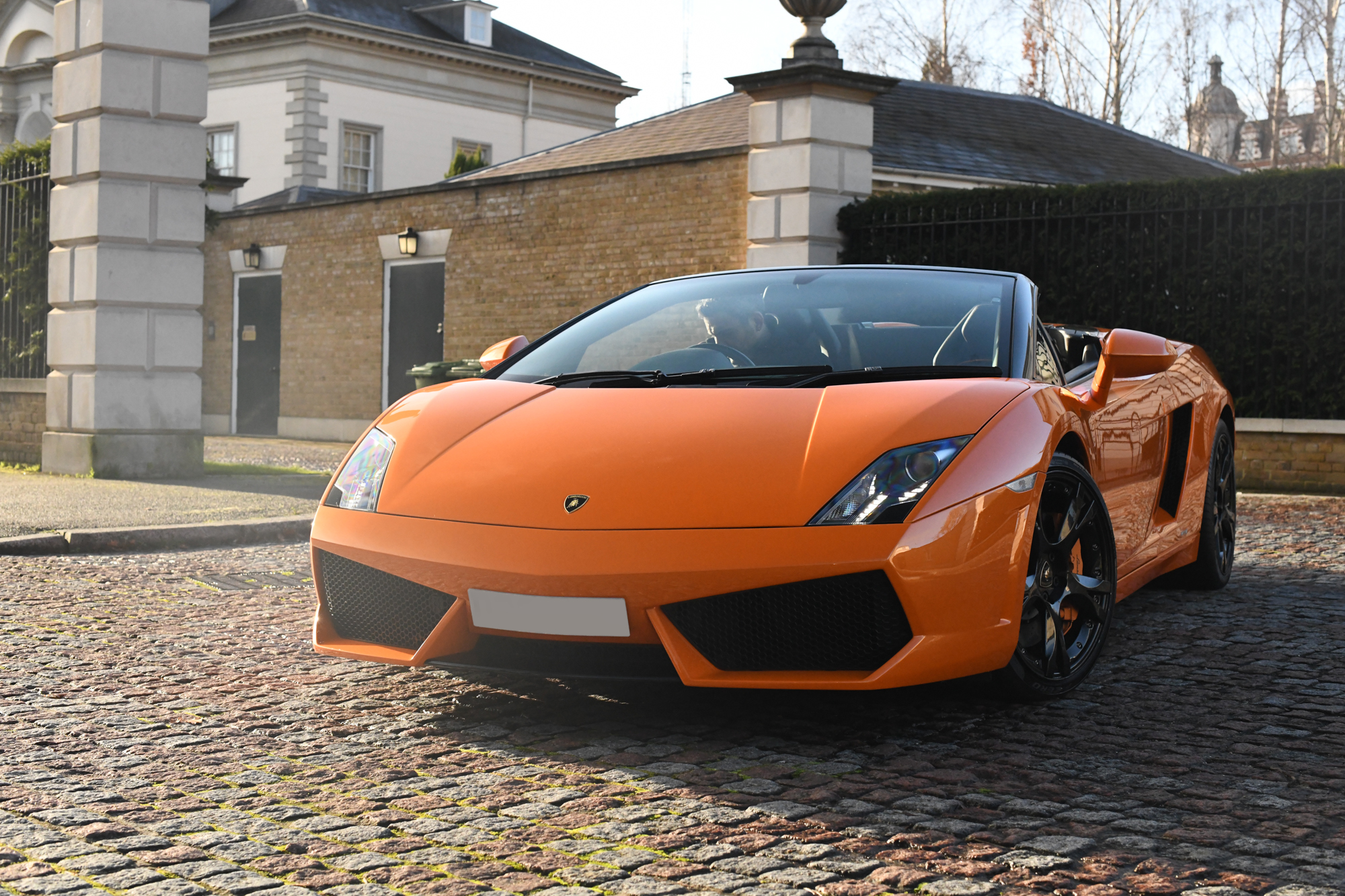 The first generation Gallardo's design was based on the famed Giugiaro Cala prototype and is a striking continuation in a line of great fighting bulls. The first all-new vehicle made under the Audi marquis, it was met with critical acclaim on it's debut and has aged beautifully. It's an affordable and usable sports car that has the performance, excitement and styling to match anything on the market today.

With German quality fortifying its Italian engineering, this compact baby bull has all the reliability without compromising the drama that Lamborghini had built its reputation on. Lamborghini hadn't produced anything other than beefy V12 monsters since the Jalpa, so the Gallardo was a fresh crack at the bottom end, usable supercar market. The Gallardo was Lamborghini's highest production model to date, 12,000 strong, and with so many model variations it can be hard to unscramble all the code names and models. The rule is, the later the years the higher the power, but read on to decode all the other elements of baby bull evolution.

The first generation had a lotus-esque focus on lightness. The featherweight but stiff aluminium space frame and panels supported and enveloped a 5L V10, 4 wheel-drive, and a 6 speed manual box (or 6 speed e-gear with paddles).

Late 2005 saw Lamborghini introduce an improved Coupe which was upgraded to include a better engine, new steering rack, a sportier suspension and exhaust system, and most importantly shortened gear ratios (especially in 1st to 5th gear) to mitigate some of the criticisms made of the initial iteration. Shortly after the unveiling of the coupe, the Spyder arrived. Aptly unveiled in Los Angeles where under the blazing sunshine, sales of the soft top skyrocketed. Also released in 2005 was the Gallardo SE, a limited edition (250 units) Gallardo externally designated by a black roof, and a two-tone colour scheme and special "Callisto" wheels. The interior also featured a two-tone finish: all piping and stitching, as well as the midsection of the seats, matched the body colour of the car. Two party pieces made the SE truly stand out, a rear-view camera and a "thrust" mode. Thrust mode was the living proof that the Gallardo lost of Lamborghini's fun, it automatically revs the car to 5,000 rpm and drops the clutch, engaging all four wheels in a controlled burnout, a flashy version of launch control.

In 2007 the Superleggera, "superlight" in Italian, was unveiled, taking inspiration from it's Touring designed namesake, the first Lamborghini. True to its name, the Superleggera was 100kg lighter than the base model due to replacement carbon fibre panels used for the rear diffuser, undertray, mirror housings, interior door panels, central tunnel and engine cover. Under the bonnet the engine got a 10hp upgrade bringing the output to 530 hp for all 618 units produced and shaving 0.1 seconds off the 0-62pmh time.

Following the Superleggera, the Gallardo Nera was another special edition that was debuted at Paris. It was produced to showcase their "Ad Personam" customization programme and the extensive range of options available. Each of the 185 units was painted a special matte black with blacked-out tail lights and bespoke silver brake callipers. The monochrome theme continues on the interior with high contrast black and white leather in the company's Q-Citura print.

So what specifics should you be wary of on 2003-2008 Gallardos? Early 5.0 engines were prone to oil pump problems and some lower-mileage cars can have sticking throttles causing engine revs to hunt, but neither of these possible hold-ups is the end of the world. The high production run means parts are easy to find and German engineering means it's not just marquee specialists that will be able to help. It would be remiss not to mention the recall of about 1500 of the Coupe and Spyder models made between May 2003 and April 2008. There was a risk of power steering fluid leaking and thus of fire but all of the models have been repaired. The earlier the production and the higher the miles, the lower the price tag on these vehicles. So if it's a supercar your after but your budget is low, the reliability that the Germans brought to the table means even an old, high miles Gallardo is a reasonably reliable purchase.

Ferrari's introduction of the F430 prompted Lamborghini to raise their game. The new LP560-4 was powered by a new 5.2L V10 with an uneven firing angle that produced 552hp (560PS) and featured the "Iniezione Diretta Stratificata" direct fuel injection system which improved efficiency and diminished fuel consumption reducing CO2 emissions. Other changes included a 20kg weight loss, a revised transmission and a new four-wheel-drive system (hence the "-4") as well as a redesigned front bumper that took inspiration from the inimitable Lamborghini Reventon. The new engine came with the same choices as the previous generation: 6-speed manual or 6-speed e-gear, but the e-gear was upgraded to offer a "Corsa" mode which made shifts 40% quicker and decreased traction control restrictions. The SE's "Thrust Mode" was also carried over contributing to the blistering 0-62mph time of 3.7 seconds and a top speed of 202 mph. In November 2008 the accompanying Spyder was released marking the second generation of Gallardo to have a soft-top option.

In 2009, to commemorate the retirement of their legendary test driver Valentino Balboni, Lamborghini released the only RWD vehicle in its lineup in over a decade, the Gallardo 550-2. Designed to Balboni's exacting specifications, this special Gallardo was designated by subtle stripes, a gold and white one on the exterior and white on the interior. It also featured two badges a subtle 550-2 one mounted low on the side sills, and an aluminium one on the interior that bore its namesake's signature and the production number of the car, _/250. This special edition was a roaring success and was named Top Gear's Car of the Year in 2009.

Just like it's predecessor this generation Gallardo had a Superleggera iteration. True to its name this Superleggera also utilised carbon fibre to reduce the weight by 70kg to 1340 kg, making it the lightest road-going Lamborghini on offer at that point. The 5.2 L V10 got a power upgrade bringing its output to 562hp, signified by the name change to LP 570-4. Weight-saving measures and power bumps brought the already low 0-62mph time to just 3.2 seconds. The Superleggera was the sweet spot for those who were looking for a track car that was manageable on the road.

Next on the special edition timeline came the LP 570-4 Spyder Performante, the convertible answer to the Superleggera. In 2011 the SP was released and as is usual with convertibles, it was heavier than its coupe counterpart. Despite the additional weight the Spyder Performante still had a 0-62 of 3.9 seconds and a top speed of 202 mph.

In 2011 the Gallardo line took a break from upward trending performance numbers and focused on economy instead. The LP 550-2 Coupe was the low-end offering in the model line and was distinguished by black side skirts and 550-2 badging. As the "2" in the name suggests, this model was 2 wheel, specifically rear wheel, drive. It came with the suspension tuning borrowed from the Balboni edition and a 6-speed manual transmission. The e-gear option was also available but at cost.

2013 marked the end of the line for the Gallardo. It's 10 year production run was so prolific, that at the time it was the company's best-selling car ever. As the old adage goes, use it or lose it, so when looking for a Gallardo you're better off finding one that had a comfortable number of miles added each year. On the mileage front, some cars may have had their speedo's wound back. Because of their popularity and relatively low price point many were used as track day cars so if the miles seem suspiciously low check for tell-tale signs of use like feathered tires, worn brakes, gravel stuck in body panel gaps, and wear and tear on the Alcantara of the interior, in particular the steering wheel which will appear shiny. In pre-2005 models check for a cracked front bumper as there wasn't a front lift option, and in post-2005 check that the front lift system fitted works. At the end of the day, this baby bull is sure to put a smile on your face and with the same footprint as a Ford Focus, the Gallardo is an unbeatably usable sports car. Add a design that could have come out of the studio yesterday and you have a truly winning formula.

Examples of Lamborghini Gallardo we have sold