After many months of missing out on all of our favourite events and tours, this year’s famous Salon Privé concours at Blenheim Palace in Oxfordshire was the perfect end-cap to the first summer following the pandemic. Now in its 16th edition, the prestigious event saw a whole roster of amazing classic cars on show for all to see.

Ahead of the concours, we attended the renowned Tour Privé, a beautiful 100-mile driving tour throughout the best roads of Oxfordshire, this year stopping at Grittleton in Chippenham for a decadent lunch stop before returning to Blenheim’s South Lawn. Our founder Anthony Pozner, and wife Elisabeth took part in the tour using our pristine 1967 Ferrari 275 GTB/4 which performed faultlessly, and was a definite stand-out car during the tour which included the likes of Jaguar E-Types, Porsche 911s, modern Ferraris and many more. 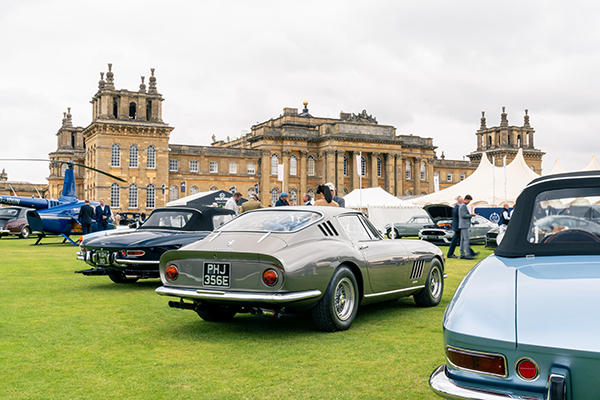 A particular favourite part of the event for us was the inclusion of not one, but two original Ferrari 250 GTOs. These incredibly rare cars (a mere 36 ever made) have rich and successful racing histories. The first, chassis 3767GT, being the iconic green painted example owned by the famous privateer racer David Piper. The second car - arguably even rarer, was chassis 4399GT, a 1963 example featuring the revised and aerodynamic bodywork developed by Ferrari for the 1964 season. This car was driven to victory at Silverstone and Goodwood in period by none other than legendary british racing driver Graham Hill.

Alongside the two GTOs was ‘The Red Collection’ - a stunning arrangement of cars which included a Porsche 904, a Ferrari F40, an original Maserati 250S, a Ferrari 275 GTB ‘Competizione Clienti’ as well as a McLaren F1. As long-time Ferrari and Porsche specialists, we rather enjoyed this group of vehicles!

This year’s edition of Salon Privé was, in our view, one of the best yet and we’re already counting down the days to 2022’s event.