Perhaps the most glamorous, elite and exclusive automotive event of them all, Concorso d’Eleganza Villa d’Este finally took place over the past weekend on the shores of stunning Lake Como. While the Hendon Way Motors team sadly couldn't attend the event this time round, there was one particular car we spotted all over our social feeds which caught our eye...

But first, some backstory.

In the mid 90s, Porsche faced a serious rival at the 24 hours of Le Mans: McLaren. Taking overall victory at the 1995 race with their new F1 GTR, McLaren successfully beat the German automaker and in no small fashion too, with McLarens taking four out of the top 5 positions, all in their first year competing. As expected, Porsche were not very happy about this, and set their sights on not only retaking the crown in 1996 but creating a new, radical racecar, the likes of which the world had never seen.

Porsche’s venerable 962 chassis, while brilliant, was outdated, and their 911 was in a lower class and simply couldn’t keep up with the McLarens and their thunderous V12s. So, they turned to a man called Norbert Singer, the head of Porsche’s racing division who had been a key element in seven Porsche victories at Le Mans in the past, ranging from the legendary 917 in the 70s, the 962 and the UFO-like 935. 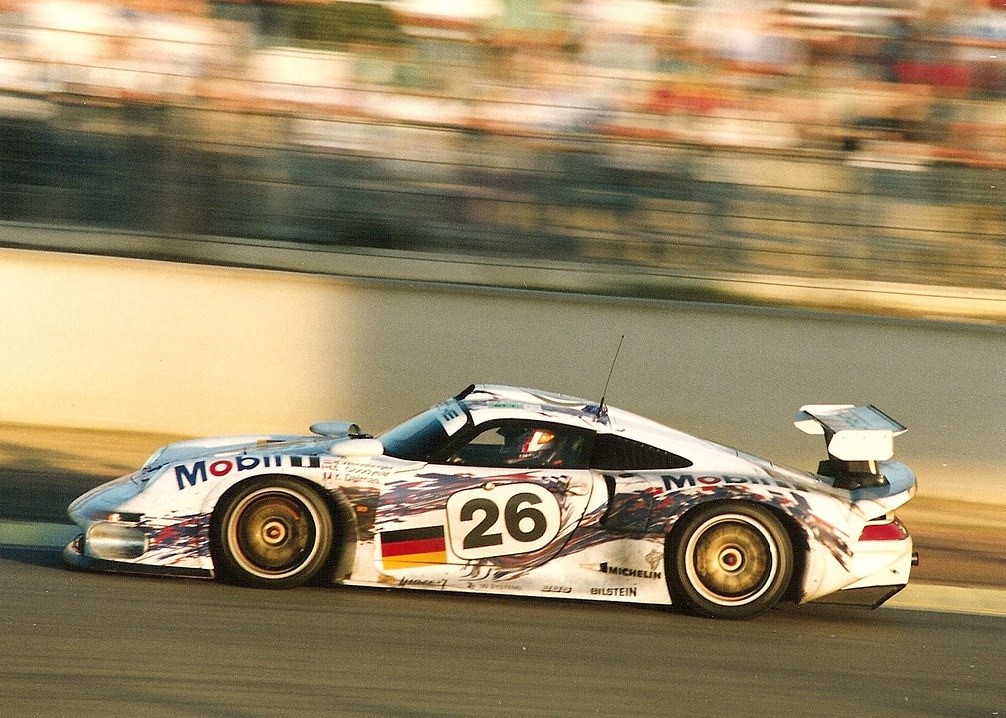 For the 1996 race however, Singer had to deal with a new set of GT1 regulations for Le Mans. In order to qualify for the race, manufacturers had to build and produce one road-legal version of their racecar which was on sale to the public. These homologation rules were followed by every manufacturer competing - the McLaren F1 GTR was derived from the F1 road car, the Ferrari F40LM from the F40 road car and so on. However, Singer found a loophole in these regulations - he turned the rule on its head and decided to design the racecar first, then develop a road-legal version. This purpose-built racecar could be more powerful, aerodynamic and serve as a true rival to the F1 GTR.

Featuring a mid-engine design, carbon fibre bodywork (visually based on the 993 generation of the 911), a 3.6 litre flat six developing 600 horsepower, and total kerb weight of just 1050 kg, the new 911 GT1 proved to be quite the monster when it hit the world’s circuits in the 1996 season. And after approval by the German government of the GT1 Straßenversion (Street Version), the GT1 racecar was allowed to compete at Le Mans, beating McLaren in the GT1 class and only losing overall to another type of Porsche in a separate class, the WSC-95.

The 911 GT1 Straßenversion is an incredibly rare car as only a handful were ever produced. As it was a racecar turned road car, it features a slightly higher ride height, leather interior elements and a slightly less powerful engine making 544 horsepower, but is essentially the same as the Le Mans example.

This particular GT1 is one of two prototypes and is part of a collection in Bahrain, and you can just about see the resemblance to the 993 911 with its solid taillight bar and front end indicator lamps. Hopefully the owner gets as much use out of it as Porsche did in 1996 - we can imagine the GT1 to be quite the weapon to drive on the road let alone on a track.

Porsches are some of our favourite cars we've had in stock, so the story of this extreme racer really resonated with us - hopefully we'll be able to see one for real soon - in the meantime if you're looking for a 993 911 (the car the above GT1 was visually based on) get in touch! We've got a whole roster of 993 Porsches including a new-in Zenith Blue Carrera S with only 68,000 miles available at our London showroom.